Don't Wear Your Good Sh*t to the Doctors

God forbid something happens and you have to be rushed to the hospital. Please tell your family to first remove any good sh*t you may have on. According to this news report doctor lets patient die so he could steal his watch. Can we say G-H-E-T-T-O ? (and sad) 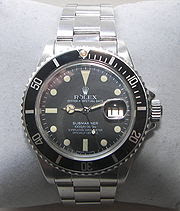 According to the lawsuit, Jerry Kubena Sr. was rushed to the St. Joseph’s Medical Center on June 1st for heart problems. Emergency room physician Dr. Cleveland Enmon allegedly allowed Kubena to die from a heart attack after he noticed his Presidential Rolex watch on his wrist. Two nurses reportedly noticed the watch was missing from the body of Mr. Kubena, and that a bulge appeared in the doctor’s pocket.
full story on justicenewsflash
Posted by Tickles.Tv at 8:14 PM