Trying to get Grandma not to use the “f word

Breaking the habits of a West Indian grandma is like pulling teeth. 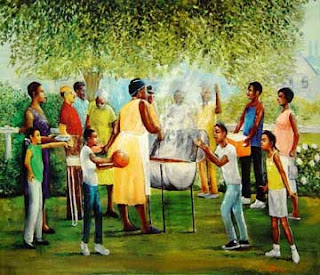 Everyone knows my uncle Andre, my grandmother’s youngest son is gay even though no one talks about it. I’m not sure why since no one has a problem with it not even old school grandma. But whenever there is an open invitation for everyone to bring friends to one of our family parties uncle Andre never does. It’s not like uncle Andre doesn’t have any friends he is always the life of the party singing, dancing and cracking the funniest jokes. And at the end of every party grandma tells Andre to please bring some friends next time. That’s just how grandma is she wants to know who your extended family is and for them to know us.

This year grandma insisted that everyone bring at least one person and turned to Andre and said, “Don’t even botha come if you too ashamed of us.” Uncle Andre tried to explain, “It’s not that...they’re always so busy.” Grandma hobbled out of the room on her cane ignoring him. Uncle Andre knew that no excuse was going to be acceptable; and he'd better show up with someone.

The next time we had one of our family parties everyone was getting worried for several hours had gone by and uncle Andre had not shown up. Finally the door bell rung and in walked uncle Andre with a tall, attractive Indian man who he introduced to all of us.

“Everyone this is Ravi.”

Ravi waved a timid hello and everyone smiled back and in unison said, “Hi Ravi. ”

Grandma came from the kitchen and busted through the crowd standing in the entrance way, walked up to Ravi, grabbed his hand and said,

“Nice to meetchu are you a faggot too?”

GRANDMA YOU CAN’T SAY THAT!

Grandma is old school and just not used to the political correct expression so we got to work on her.

click here for: How the Urban Chameleon Came to be
Posted by Tickles.Tv at 7:13 AM