Is Everyone But Harry Belafonte Riding Jay-Z's Dick? 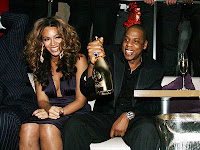 Yes I said it. And I no I cannot wait until I have the privilege of being 85 years old like Mr. Harry Belafonte to say what needs to be said.

In a recent interview with The Hollywood Reporter, Mr. Belafonte was asked if he was happy with today's Hollywood images of minorities. Mr. Belafonte replied, "Not at all...It is all --excuse my French--shit."

He goes on to use Jay-Z and Beyonce as an example of turning their backs on social responsibility. It's hard to ignore this point and so I'm in conversation about it.

So why aren't more of today's young Black rich celebrities socially active? One could also ask, should more Black elders be holding them responsible?

Regardless of how you analyze this question, what's worth noting is that something happened between the Civil Rights Movement and the Hip Hop Generation.

My mom recalls when drugs were deliberately put into the Black communities to break up the power behind unifying the community. All that hard work and blood shed, which once had a clear community purpose lost its road map. So even though we won the
right to sit in the front of the bus, it didn't stop some of us from acting like a fool on that
bus.

I can only imagine Jay-Z's reality from his songs and lyrics, framing for us what it took
for him to get to where he is. Pulling himself up by his own boot straps after he had to
make the boot, steal the materials for the boot and lets not forget, get shot at for the
boot. It's not so unreal that a rich rapper's financial values would be more in line with a
conservative Republican. I got mine, you betta get yours.

Even though our community is suffering from poverty, mass incarceration, and unequal
educational systems, unlike Mr. Belafonte, for Jay-Z, the term "community" may just be
a definition in the dictionary. Yes, Jay-Z has the Shawn Carter foundation that has made
charitable contributions. However, KultureKritic interestingly breaks down that the $1.3
million dollars given away through 750 Scholarships estimates to be about $1,733 per
child. Not only can that barely get anyone though a semester of college it can't even
buy one of those kids a Louis Vitton bag. Is the foundation more of a public relationship
obligation and tax write off rather than an actual social responsibility.

Although I don't have the answer, I'm sure as hell glad that Mr. Belafonte isn't more
concerned with chilling in the champagne room with Jay-Z than he is with calling him
out and asking some real questions. I sure hope Jay-Z isn't at home working an a Belafonte
retaliation track...cause this beef is way more serious than that sh*t that went down with
Nas.

Have your Urban Chameleon opinion featured on an issue by e-mailing tickles.tv@gmail.com