For years Black audiences associated Wayne Brady as an "Uncle Tom" or a culturally detached brotha. However, since Wayne's Brady's debut on the The Chappelle Show a few years back, revealing himself to have a "gangsta" side, he has gained much respect. His Urban Chameleonism came out and Black audiences could satirically relate. If you have not seen Mr. Brady's rendition of Bobby Brown's, "Every Little Step" featuring Mike Tyson I encourage you to watch NOW. GENIUS!

Click here for: How the Urban Chameleon Came to be
Posted by Tickles.Tv at 11:15 AM No comments: 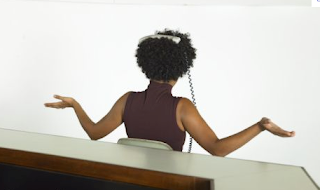 Sistas in positions of servitude are often gatekeepers to the information you need. Whether you're trying to return an item a day past the expiration date, or not tying to have to stand in multiple lines at the DMV because of a missing document – these sistas will either make or break your day.

You often have to approach the situation thinking, “Do I want to win or do I want to be right?”

For example, knocking a sista upside the head for giving you much attitude when answering a simple question, may be considered the "right" thing to do – being that it’s her job to answer the question! But if you just missed your connection and are trying to get information on the next available flight, this might not be the way to win.

Even one of my guy friends peeps the hostility exuding from most servitude sistas. He usually combats this with a compliment on either their hair or nails, which often helps to melt some of that anger...even if just for a moment.

I've often felt the hate exuding from the servitude sistas sitting behind the desk. I usually switch into my around-the-way tone in attempt to gain some level of connectedness and convey, “Girlfriend, I am one of you." But they would never know that and are rarely trying to hear that. All they see is a pretty girl, with pretty hair, light skin, and light eyes. Spike Lee’s School Daze all over again.

My mom, who happens to be a servitude sista, peeps the nasty attitudes amongst some of her colleagues, which burns her up inside as she recognizes this as another form of self hate. Because she is a darker skinned woman servitude sistas tend to confide in her. Whenever a fair skinned woman walks into the office one of them will say something to the effect of “She thinks she better than me.”

Honey, that is the last thought on anybody’s mind. And even if it is, who cares! Just do you.

On the flip side, I was standing at the end of a long check out line at a Trader Joes. The cashier, a sista, was closing out her register, until she spotted me and gestured for me to come over. When I approached her she said, “You know I only opened for you because we have to stick together.”

Thank god there are some places where the race card still works.