Trayvon Martin and the fatal history of American racism

by today's Urban Chameleon contributor Kevin Powell via The Guardian 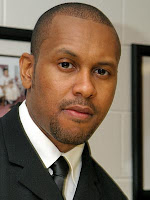 I am Trayvon Martin.

So are you. And so is any human being who has ever felt cornered, in a dark and desolate alley, between life and death. Add the grim reality of skin color in America, and you have the disastrous spectacle of 250lb George Zimmerman, 28, pursuing 140lb Trayvon, 17, until that man-child is screaming "Help!" – and then gasping for air after a bullet from Zimmerman's 9mm handgun had punctured his chest. A majority-white, gated community became, on 26 February, the makeshift mortuary for a black boy who will not get a chance to live, to go to college with his exceptional high school grades, to make something of his life. Trayvon's fatal act: a mundane walk to the nearby convenience store to buy a can of iced tea and a bag of Skittles.

This is what racism

, the American version of it, means to black boys like Trayvon, to black men like me. That we often don't stand a chance when it has been determined, oftentimes by a single individual acting as judge and jury, that we are criminals to be pursued, confronted, tackled, and, yes, subdued. To be shocked and awed into submission.

The police authorities in Sanford, Florida, where the shooting occurred, are apparently so mired in racial prejudice and denial that George Zimmerman, at this writing, still has not been arrested nearly a month after Trayvon was killed – in spite of Zimmerman being told, on 911 police dispatch audio, not to follow Trayvon Martin.

In spite of Zimmerman being charged in 2005 with resisting arrest with violence and battery on a police officer...continue reading on The Guardian

Have your Urban Chameleon story featured by e-mailing tickles@tickles.tv