URBAN CHAMELEON invites you to create your own MEDIA in ATL!!! 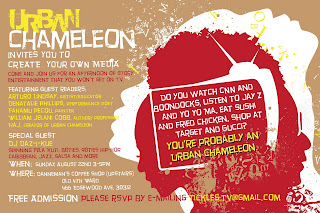 If you or someone you know are in the ATL area Sunday, August 22 from 3-5PM please come out to our event and share ideas of the kinds of stories and characters you would like to see on TV.
There will be a live performance of the original stories shared from our blog by some of Atlanta's finest artists, authors, painters, poets, and performers hosted by yours truly ME, HaJ, creator of URBAN CHAMELEON media.

Where: Danneman's Coffee Shop (Upstairs)
Old Fourth Ward
466 Edgewood Ave
Atlanta, GA 30312
3-5PM
Hope to see you there!
Have your Urban Chameleon stories featured by emailing tickles.tv@gmail.com
click here for: How the Urban Chameleon came to be
Posted by Tickles.Tv at 10:15 AM No comments:

Star Wars Comes to the 'Hood 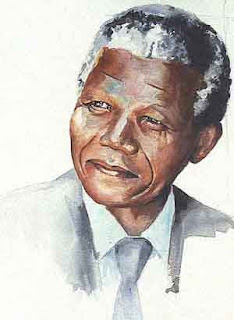 Surreal the trip had been already. I found my self here in South Africa surrounded by self-proclaimed “coloreds” and my homie from the “D” in an upscale restaurant in one of Cape Town’s finest dining establishments. We were discussing the frustration of coloreds and black s alike in South Africa at the fact that Mandela had not done more to punish South African whites as he took power. Many South Africans of the browner persuasion felt that they had been sold out. They felt like African Americans would not have stood for such a passive take over. They cited the rhetoric of Malcolm X and the resumés of revolutionaries like Huey Newton and Angela Davis with the thoroughness of the deepest Afro-American history scholar. They put the African American civil rights struggle on a pedestal and languished their own leaders’ inability to be as effective, as aggressive, as revolutionary.

My man and I asked many questions and learned a great deal about our South African sisters and brothers over bottles of South African wine and faire. Our bellies and minds full, we paid the bill and prepared to exit, my homie and I nearly running, because we still could not believe that a meal of that quality could cost so little. Surely the waiter would be after us to let us know he’d made a mistake and forgot to charge us the proper amount.

As we walked to our car a black South African man approached. Clearly the brother was homeless. His hustle was watching the cars parked along this dark but busy street ensuring that cars were safe from the rash of smash and grab robberies that occur often in cities like Cape Town where “the haves” have in great abundance and the have nots, well, you know.

He overheard my man and I talking and his eyes lit up.

“Hey! You guys are American!” he said excitedly.

“Oh wow!” he said giving us dap. “You guys are the real, the real NIGGAS”

My homie and I looked at each other is shock. “Nah b. We brothers.” I said coolly.

“No man, you guys are the REAL NIGGAS. Like for real.”

“No man. We not niggas, we brothers”

“No, its ok” he assured us, “You’re real niggas. Not like these guys from West Africa that come here and think they niggas, you guys are the REAL NIGGAS. I want to be a nigga like you too!” he said with a big smile.

We continued to object. “Listen man, we NOT NIGGAS. We brothers. You can be my brother” my homie said as relaxed as possible.

The man’s face stayed frozen in an excited, yet naïve smile. He seemed to want us to affirm his “nigga’ status. Our “colored” friends joined in, they had picked up on our defiance of being called niggas in the middle of a Capetonian street,

“No, Nigga is a compliment”, they said. “It's a term of endearment. Its not what you think.”

I was floored. Were these not the same people running down the Civil Rights movement as though they were being voiced by Skip Gates? The surreal had become even more real.

“Yo, being a nigga is NOT cool. Its not a compliment” I said as calmly as I could

I could see the confusion of a thousand hip-hop songs, stand-up comedy sets and exploitative black movies crashing all around. Nigga is so much a part of black American dialect that sometime we say it without realizing it. We only hear it when it rolls off of a foreign tongue (literally or figuratively).

Our friends and the homeless man are probably still confounded to this day. Afterall, their use of the word nigga in relationship to my man and I was a means of identifying with us, their American brothers. Truly for them the word was a term of endearment and a gesture to show their affinity towards all things Afro-American.