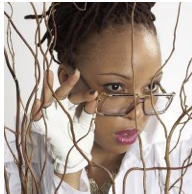 I was invited to participate in Huffington Post's live video chat hosted by Marc Lamont Hill discussing the Adidas "slave sneaker" controversy. You can watch by clicking on the link. However, my written commentary may better reflect the points I was hoping to make.

1. I almost drowned in tears of laughter. Did someone really say let's make a "slave sneaker?" Where the hell were the Black executives at Adidas during the proof of concept meeting? Please don't tell me they got the -itis and missed the meeting after indulging in the Burger King crispy chicken wrap. Wait a minute, has this slave sneaker revealed a bigger issue --- that Adidas has nobody on staff who is a descendent of a slave to say, "Hey guys, too soon?" 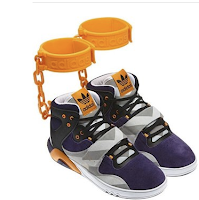 2. Wait, what are we defining as "targeted? I've heard two different narratives for the concept behind this design. 1) "This sneaker is so hot it must be chained to your ankle." 2) The designer feels like a slave to the fashion industry." Regardless both ideas deserve a good lynching.

On the other hand, there is great irony that the "urban community" would have such a visceral reaction to a sneaker. Why is that? Because "we" are slaves to our sneakers. How many times have we heard a story about someone getting shot (or at least Tasered because someone's sneaker's got stepped on. Hell, I've almost shot someone myself (with a water gun of course).  Now that's commentary I could have gotten behind the designer on.  In fact, the slave sneaker should have been a crispy white pair of Jordan’s with a foot a print on the toe and spots of blood representing the fallen homies.
3. You have to be sensitive to be insensitive.  We as Black people are programmed to be confrontational about race because our history includes fighting for basic human rights because of our race. White people have the luxury of coming up with designs like slave shackles without it having any kind of stigmatization on their identity. Wait, am I being racist assuming the slave sneaker designer is white? Regardless, my people...Black people crave that kind of freedom...but wait, a lot of us would then be out of work (including myself). What would there be to complain about? Never mind. Racism may be doing more for the economy than government.
4. Let it go? Let it go? Hell no!!! (That is until the next racially charged news line) Of course we see race in everything. Our freedom was built on it. However, I sometimes think it's us perpetuating racism. We've become a reactionary culture instead of a proactive one. We for some reason continue to seek white's people's approval (even subconsciously). We complain there are not enough of us in this or that instead of building our own systems that work for us. Imagine if we spent less energy complaining and more creating. Did I get too deep? 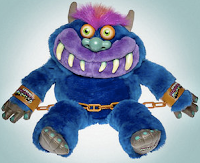 5. Only to the person who had the intention. For everyone else perspective is reality. Does it matter if the designer was using this monster image as inspiration? How many Black people would believe him even if he pinky swore? People only care about how they're affected and maybe as long as they do we might not ever be able to have a progressive conversation.

Have your Urban Chameleon story featured by e-mailing ticklestv@gmail.com

Light continues to shine on the "Black" experience in America. It seems like every time I look up there is new satire on Black people responding to living in a "white world." The trailer for a new film currently looking to raise money for production called, Dear White People was released on YouTube only a couple of days ago and has gone viral. The film appears to explore the same ol' issues that Black people have been complaining about for years, hair touching, that one Black friend and white people's craving to use the "N" word. However, Dear White People not only satirically integrates the current day chatter of the Black community down to "Tell Lucas I want my $15 back for Red Tails!" but appears to be very cinematic, which commands a different kind of attention from the videos about race on the web.

I wonder what white people have to say about all this circulated Black commentary. Maybe it's time for a two-way conversation? And I don't mean the reactionary mean spirited, racist and ignorant remarks found in the comment section on YouTube. Real talk what are we all looking to ultimately achieve?

Have your Urban Chameleon story featured by e-mailing tickles@gmail.com