Dear Obama heckler are you smarter than a 3rd grader?

I definitely have a theory that people never mature beyond third grade. Some of us just do a better job at controlling ourselves but I find that the same visceral instincts that existed then still exist when you’re grown. Sometimes instead of telling someone that you like them- you act weird. Sometimes when someone hurts your feelings you get back at them and sometimes when someone says something you don’t like you boo and shout “LIER!” even if it's to your president in the middle of his Health Care Reform speech.

I ask you Joe Wilson, are you smarter than a 3rd Grader? and get this! people are actually making contributions to dumb ass (read below) 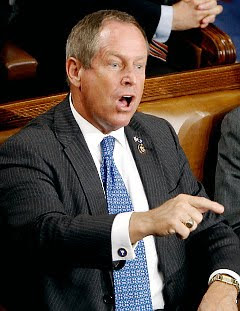 Rep. Joe Wilson’s (R-SC) shameful screed from the back-benches of the congressional gallery last night has made him a cause célèbre for the far right. The “freeper” posters at the Free Republic called for donations to Wilson (that post was subsequently removed). Republican activist Patrick Ruffini encouraged his Twitter followers to contribute to Wilson. Calling the South Carolina congressman a “great American hero,” RedState.com’s Erick Erickson posted this fundraising solicitation on his site:

Joe Wilson has been identified as the Republican who yelled out that Barack Obama was a liar.

He gets a drink on me!

CONTRIBUTE TO JOE WILSON HERE. Joe Wilson’s opponent raised $11,000.00 in an hour after Joe Wilson stood up to Barack Obama. We must help Joe Wilson.

While the far right circled the wagons around Wilson, Democratic activists quickly opened their pocketbooks for Rob Miller, “an Iraq War veteran who unsuccessfully challenged Wilson in 2008 and is seeking a rematch next year.” By 10 am this morning, nearly $60,000 had been donated on Miller’s ActBlue’s page.