Why can't Kanye West go AWAY...but wait do we want him to?

I did not watch this years VMA's but my nightly news was of course flooded with replays of what Kanye did to Taylor Swift during her acceptance speech, which was to grab her mic and tell her and the world that Beyonce should have won. I think at this point Kanye West has annoyed us all whether you still watch award shows or not but can this man be stopped and does anyone really want to stop him? Media thrives off these kinds of out bursts and we the people play right into it even when we criticize for some how it still ends up benefiting Kanye. Sure a slap on the wrist and and an apology statement may be in "order" but never any real accountability. And how do we know this? BECAUSE HE KEEPS DOING IT! I've heard talks of people threatening not to buy Kanye's album. Well that is definitely going to have to be a white people's movement 1) to really affect a man's pockets and 2)to make a point because as soon as Black people hear a beat they are feelin' it's ova "We gettin' dat sh*t."

I do wonder what the long term fate of Kanye will be. In the meantime I found a great piece from the blog newblackman below on the subject matter. 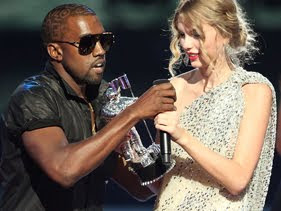 Twitter and Facebook were aglow, seconds after Kanye West’s most recent flare-up, this time snatching the microphone from a bewildered Taylor Swift, who had just won the “Best Female Video” award at MTV’s VMAs. West was ostensibly “protesting” Swift’s victory over fellow nominee Beyonce Knowles. West’s behavior at such events has become something of a cliché and as such it was almost to be expected. But this time was a bit different, in that West was not protesting on behalf of his usual favorite charity—himself. Something was afoot.

In a weekend that was in part defined by black impropriety—Michael Jordan’s Hall of Fame acceptance speech and Serena Williams vitriolic verbal attack on a line judge at the US Open—West’s moment seemed like staged Jes Grew, as Ishmael Reed might refer to it, in response to what has been several months of improprieties liberally taken at the expense of black bodies, be it the late “King of Pop” or the current President of the United States. It is part of a script that West has carefully crafted, in the best (post-modern) spirit of P.T. Barnum. The boos that appeared whenever West’s name was mentioned throughout the evening were also part of that script and we all sat enraptured wondering how Knowles might respond to West’s misguided attempt to “speak” on her behalf. After a stirring performance of “Single Ladies (Put a Ring On It),” all eyes were on Knowles when she received the award for “Video of the Year” and called Swift to the stage to recover her interrupted moment.

What immediately stuck me about Knowles’ gesture, were the cynics who suggested that Knowles did so at the behest of MTV and that Knowles’ kindness was essentially staged by the network. Plausible indeed, but if that is plausible, why isn’t is also plausible that the whole experience was in fact staged, to generate the kind of buzz on social networking sites that translates into increased viewership and traffic at MTV.com? Now in its 25th year, the VMAs are an aging and fatigued brand. As such the “drama” of the awards—remember Michael Jackson and Lisa Marie Presley’s staged kiss—has become more integral to the success of the awards than its performances.

There was no risk in having Kanye West act a fool, because it is what we have come to expect from him and fair amount of people will grant him his eccentricities, because of his genius. As for Taylor Swift, she now has increased visibility because she was the victim of black impropriety, something she shares with Kim Clijsters, winner of the US Open. Beyonce Knowles is now granted a level of gravitas for her public graciousness or what critic Leonard Feather once termed “a rare noblesse oblige gesture” in response to Aretha Franklin giving her 1973 Grammy Award to fellow nominee Esther Phillips. And finally for MTV, they have produced the most talked about VMAs since that Jackson and Presley kiss.

click here for: How the Urban Chameleon Came to be
Posted by Tickles.Tv at 6:43 AM