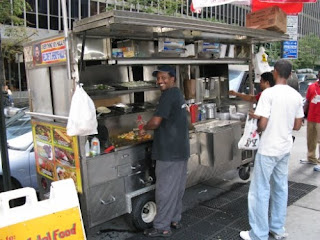 Who knew that there was a Halal Mafia with in the NYC street food cart vendors. Apparently they have been bulling the Jamaicans, Greeks, Mexicans basically anyone NOT Halal.

"They had their friends park a truck in my location because they were trying to much me out," Clive Dennis, who manages the Little Ochi Hot Spot Jamaican-food cart, told the Post. "It's like a mob thing -- these halal guys think they're the only ones who should be selling food on the street." If threats don't work, the Halal Mafia guys call 311 and start making health-code-violation complaints, Dennis said.

full article on MSNBC
Posted by Tickles.Tv at 12:26 PM