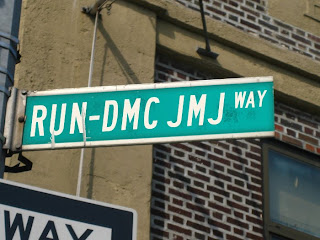 The corner of 205th Street and Hollis Avenue was officially renamed after the pioneering Hip-Hop group, Run DMC.

Next!
a proposed Hollis Hip Hop Museum could also be in the works. Councilman Leroy G. Comrie, a representative for the area of Hollis who sponsored the legislation, noted that Darryl “DMC” McDaniels had already come forth and contributed memorabilia to the proposed establishment, which was once home to the Hollis Famous Burger. full article on LimeWire Music blog

In April, Run-D.M.C. was inducted into the prestigious Rock & Roll Hall of Fame.

Loving the recognition!
Posted by Tickles.Tv at 9:05 PM