How One Black Man Defeated the Ku Klux Klan

I just had a very interesting conversation with a friend who was so disturbed by this video- so much so that she couldn't articulate her anger. My initial thinking in watching was that I was tickled by the Black man's response to the cruelty he received from the KKK as I believe it takes incredible strength to have control over one's emotions, especially in this situation. Others disagree and see it as weakness or being submissive in ways that these kinds of white people want. If change for the better is the outcome should it matter? I guess it only has to matter to the person who did what they had to do to make the change.

However, I do agree that what's problematic (in this video clip) is that the ex-KKK member being interviewed comes off at the end as if to give his approval of the Black man's reactions instead of addressing how inexcusable his actions were in the first place. But then again who knows if there was more to the interview. Context is everything at least in regards to the impression it leaves on folks... 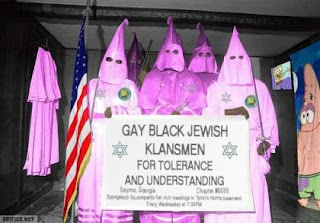 As good an ol’ boy as good ol’ boys get, the guy led his Oklahoma Klan chapter through cross-burnings, threat campaigns, and even church arson for the better part of a decade. The entire time, he constantly harrassed NAACP leader Reverend Wade Watts, who would turn out to be the Roadrunner to his Wile E. Coyote, spoiling and thwarting his racist tactics time and again, usually in hilarious ways. Clary eventually left the Klan, became a minister, befriended Watts, and was even invited to preach at the church he had once tried to burn down. In this talk show clip, Clary describes his run-ins with Watts while he was still a Klansman. They’re actually very funny, especially the last one that finally made him give up on going after the reverend.

History of the KKK

click here for: How the Urban Chameleon Came to be
Posted by Tickles.Tv at 2:01 PM