Xerox will be the first Fortune 500 company to be headed by a Black woman...

Urban Chameleon of the day 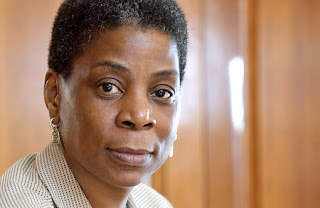 The new head of Xerox Corp. is a native New Yorker who grew up in a lower East Side housing project.

Xerox will be the first Fortune 500 company headed by a black woman when Ursula Burns, 50, takes the reigns this summer.

Burns replaces Xerox CEO Anne Mulcahy, 56, who told shareholders Thursday she would be retiring in July and had picked her lieutenant as her successor.

Burns climbed the corporate ladder at Xerox, beginning as a summer engineering intern in 1980 and rising to president of the printing giant in 2002.

As president, Burns oversaw a large chunk of the company's operations including overseas research and development, engineering, manufacturing and marketing.

She helped to build Xerox into the world's largest maker of high-speed color printers.

Last year, Burns ranked 10th on Fortune magazine's top 50 Most Powerful Women in America. She's the second-highest placed African-American woman behind only Oprah Winfrey, who was ranked No. 8.

"She has taken us back to the old neighborhood a few times," said Melissa, a reference to Delancey St. on Manhattan's lower East Side. "Apparently it's a lot better now than it was when she was growing up."

In a 2003 interview with the New York Times, she described growing up poor in "the projects" - with "lots of Jewish immigrants, fewer Hispanics and African-Americans, but the common denominator and great equalizer was poverty."

Burns' mother took in ironing and ran a home day care center so she could send her kids to Catholic schools.

Burns, a math whiz, graduated from Polytechnic Institute in Brooklyn with an engineering degree. She got a master's degree in mechanical engineering in 1981 from Columbia University.

Burns is married to Lloyd Bean, a retired Xerox scientist. The couple have two children.

She wouldn't talk Friday, but in a letter to her staff, she said: "This company has ... provid(ed) me with opportunities and experiences I couldn't even dream of as a little girl growing up on the lower East Side of Manhattan. I feel so fortunate."

She and her family celebrated by going out to dinner after the promotion became official.

"The house is filled with mail and flowers," daughter Melissa said. "We are all happy for her."