Didjuknow that Mattel once tried to release the Oreo Barbie?

Now question to you- is the first thing that popped into your head the cookie or the derogatory term directed at a Black person for "acting" white?

from wikipedia
In 1997 Mattel joined forces with Nabisco to launch a cross-promotion of Barbie with Oreo cookies. Oreo Fun Barbie was marketed as someone with whom little girls could play after class and share "America's favorite cookie." As had become the custom, Mattel manufactured both a white and a black version. Critics argued that in the African American community Oreo is a derogatory term meaning that the person is "black on the outside and white on the inside," like the chocolate sandwich cookie itself. The doll was unsuccessful and Mattel recalled the unsold stock, making it sought after by collectors.[19] 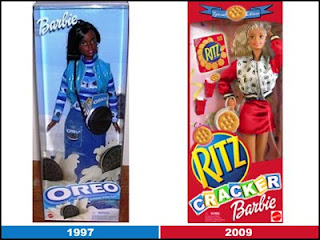 Are Black people too deep sometimes? Seriously it's a question I'm putting out there...