Well you certainly now have the option if you want to look more like MJ from the 20th Century or the 21st . And please peep how the man modeling the mask is most likely an Asian man who is blending right in. 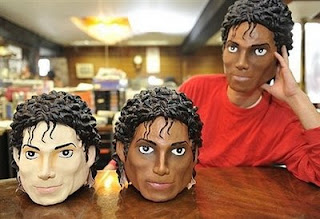 Ogawa Rubber, Japan's top rubber mask maker unveils new masks that resembles the late King of Pop Michael Jackson, at their studio in Saitama city, suburban Tokyo in July 2009. Rubber of Jackson are among the most popular purchases by Americans eager to shake off the economic doldrums and go trick-or-treating on October 31, costume sellers say.