etc from Fierce and Nerdy 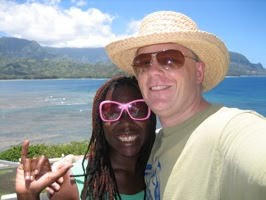 We met at a bar, then talked for a few moments at few different events, he asked me on a date, we fell in love, I moved in with him, and then he asked me to marry him in the privacy of our home after about a year of dating. Millions of people throughout history and across the world have this exact same courtship story.

Only thing is I’m black and he’s white.

However, I’ve noticed that the media and many black bloggers who both support and don’t support interracial relationships want to give my relationship a script that it simply does not have, so I wanted to spend the first day or our series dispelling three of those myths.

1. I don’t hate black men. I think a lot of people assume that if a black woman marries a white man that she must have been terribly hurt by a black man. For the record all of the black men I have dated have been lovely. A couple of them have also been on the marriage track. But none of them have been CH. I like CH better than any man of any color that I have ever dated. Period.

2. I didn’t settle because I was desperate for a husband. Now this is the myth that irritates me the most. Black men aren’t considered desperate for marriage when they marry white women. Asian women aren’t considered desperate for marriage when they marry white men. But somehow the media spins this story that black women who want to get married settle for white men because they can’t find a black man. Please don’t get it twisted; CH is awesome, and I am deeply in love with him. If you ask me who the best man I have ever known is, I will answer, CH. Without blinking. I have a lot in common, we have similar goals, and he is completely supportive of me. My friends have straight-up told me that I’ve become a better and 10x happier woman since meeting CH, and I am so excited to spend the rest of my life with him, it’s scary. I think this myth is insulting to both black women and white men, who if the media and certain bloggers are to be believed, can’t simply fall in love for the usual romantic reasons.

3. I’m not less black because I’m in an IR relationship. I wish people would retire this notion all together. If you really think of black people in terms of “acting black” or “acting white,” then you probably haven’t met very many black people throughout the diaspora. Get a passport, hit a few countries, then come back and tell me I “act white.” Otherwise, I’m not even engaging in conversation with people who insist on thinking that if you marry outside your race, speak English as taught in school, and have white friends, then you “want to be white.” That’s just a frustrating and ignorant viewpoint.

Having spoken on those myths, I am aware that there are two big elephants in the room that I haven’t tackled: We’ll get into “Black Love” on Wednesday. And though I’ve spoken here about how straight forward being in an IR is, I’m not going to lie, it is different from same-race relationships in a lot of ways — we’ll get into that on Thursday.

Until then, please weigh in on these myths that I’ve listed above and feel free to add some of your own if you’re also in an IR.