When will people realize that love has no color. 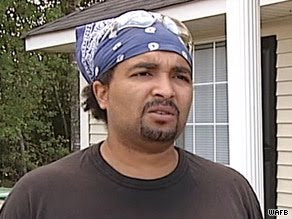 NEW ORLEANS, Louisiana (CNN) -- Civil rights advocates in eastern Louisiana are calling for a justice of the peace of Tangipahoa Parish to resign after he refused to issue a marriage license to an interracial couple.

"He's an elected public official and one of his duties is to marry people. He doesn't have the right to say he doesn't believe in it," Patricia Morris, president of the NAACP branch of Tangipahoa Parish, located near the Mississippi line, said Thursday.


"If he doesn't do what his position calls for him to do, he should resign from that position."

The demands for Keith Bardwell, justice of the peace for Tangipahoa Parish's 8th Ward, to step down came after he wouldn't issue a marriage license to Beth Humphrey, 30, and her boyfriend, Terence McKay, 32, both of Hammond.

"I was just really shocked, because he's an elected official," Humphrey said.

However, Bardwell told Hammond's Daily Star newspaper that he was concerned for the children who might be born of the relationship and that, in his experience, most interracial marriages don't last.

"I'm not a racist," Bardwell told the newspaper. "I do ceremonies for black couples right here in my house. My main concern is for the children."

Bardwell, stressing that he couldn't personally endorse the marriage, said his wife referred the couple to another justice of the peace.

She said the couple -- who received their marriage license October 9 from another justice of the peace in the same parish -- have reached out to an attorney to determine their next step.

"We would like him to resign," she said. "He doesn't believe he's being racist, but it is racist."

Morris told CNN that her NAACP chapter has forwarded the case to the state and national levels of the civil rights group.

According to the Census Bureau, Tangipahoa Parish is about 70 percent white and 30 percent black.