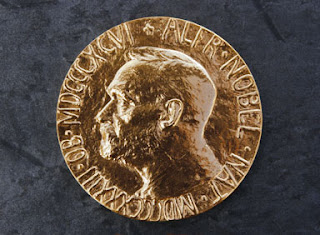 The controversy ensues over Obama’s win of the Nobel Peace Prize. It took me a long time myself to mull it over after almost being persuaded by the hype of him not deserving the win- yes the same media machine that convinced me that milk does the body good (when it actually gives me gas), vitamin water will make me live longer and KFC’s new Double Down is better than actually eating carbs. I had to take a moment, which meant jumping on Wikipedia to get some confirmed clarity on why this prestigious award is given out in the first place. Sometimes committees/ people lose sight over time, it’s like the game Telephone- the original message starts out “I ran into Sam at the store” and the message comes back, “I heard that Pam was a whore.”

In looking up the will of the prize it states

during the preceding year [...] shall have done the most or the best work for fraternity between nations, for the abolition or reduction of standing armies and for the holding and promotion of peace congresses.[1]

Oh how quickly do we forget how one man, Barack Obama had us on some “We are the world” tip. Hugging, loving, crying, laughing, cheering, white, Black, Asian, Latino (after of course getting over Hillary), up, down and around the world celebrating a new era. A ceiling came crashing down and thank god too- no more movies starring Black comedians making jokes about being the first Black president. Free at last thank god al- you know the rest. Just like you know that Barack Obama deserved the win. If not him, who? Who? It’s incredible that one commentator actually said that he’d rather them give it to some humanitarian organization as if Obama’s work and impact on people has been the equivalent of watching a marathon of Keeping up with the Kardashians.

Obama has demonstrated an impenetrable talent of touching massive groups of people. In fact there are only a handful of folks with this gift that come along every so often reminding us that we are not that different from each other and that the reason we exist... is for each other. I would say that warrants a Nobel Peace Prize. Wouldn’t you?