This level of stupidity doesn't even warrant a comment. 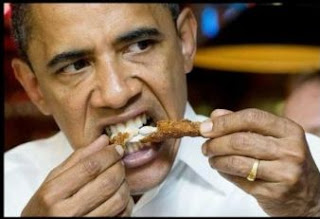 The Republican National Committee's Facebook page raised eyebrows after a racist picture appeared on the group's fan page. A “fan” of the committee posted a picture of President Obama eating a piece of fried chicken with a caption that reads:

source from hip hop wired
Posted by Tickles.Tv at 12:11 PM