Let there be light: Madonna

I know this joke has been made before but I would love to see the day when a Black mogul like a Tyler Perry adopts a bunch of white children from Eastern Europe or even Kentucky could be interesting. 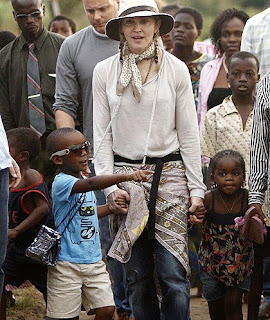 Madonna has promised electricity to a village in Malawi, the impoverished southern African country where she runs a charity organisation and from which she has adopted two children.

Speaking in Mphandula, some 50 kilometres from Malawi's capital, Lilongwe, the singer said on Thursday: "I know you work in darkness. I will bring you electricity."

Madonna's Raising Malawi charity already has donated $US500,000 ($556,359) for a childcare centre in the village that feeds and educates 3,000 orphaned children.

Madonna arrived in Malawi on Sunday accompanied by her four children. On Monday she broke ground for her $US15 million ($16.69 million) Raising Malawi Academy for Girls.