In First Lady’s Roots, a Complex Path From Slavery 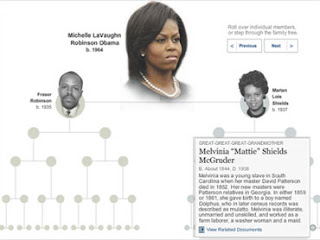 WASHINGTON — In 1850, the elderly master of a South Carolina estate took pen in hand and painstakingly divided up his possessions. Among the spinning wheels, scythes, tablecloths and cattle that he bequeathed to his far-flung heirs was a 6-year-old slave girl valued soon afterward at $475.

In his will, she is described simply as the “negro girl Melvinia.” After his death, she was torn away from the people and places she knew and shipped to Georgia. While she was still a teenager, a white man would father her first-born son under circumstances lost in the passage of time.

In the annals of American slavery, this painful story would be utterly unremarkable, save for one reason: This union, consummated some two years before the Civil War, marked the origins of a family line that would extend from rural Georgia, to Birmingham, Ala., to Chicago and, finally, to the White House.

Melvinia Shields, the enslaved and illiterate young girl, and the unknown white man who impregnated her are the great-great-great-grandparents of Michelle Obama, the first lady.Viewed by many as a powerful symbol of black advancement, Mrs. Obama grew up with only a vague sense of her ancestry, aides and relatives said. During the presidential campaign, the family learned about one paternal great-great-grandfather, a former slave from South Carolina, but the rest of Mrs. Obama’s roots remained a mystery.

The newly discovered story of Mrs. Obama’s maternal ancestors — the slave mother, white father and their biracial son, Dolphus T. Shields — for the first time fully connects the first African-American first lady to the history of slavery, tracing their five-generation journey from bondage to a front-row seat to the presidency. The findings — uncovered by Megan Smolenyak, a genealogist, and The New York Times — substantiate what Mrs. Obama has called longstanding family rumors about a white forbear.

While President Obama’s biracial background has drawn considerable attention, his wife’s pedigree, which includes American Indian strands, highlights the complicated history of racial intermingling, sometimes born of violence or coercion, that lingers in the bloodlines of many African-Americans. Mrs. Obama and her family declined to comment for this article, aides said, in part because of the personal nature of the subject.

“She is representative of how we have evolved and who we are,” said Edward Ball, a historian who discovered that he had black relatives — the descendants of his white slave-owning ancestors — when he researched his memoir, “Slaves in the Family.”

“We are not separate tribes of Latinos and whites and blacks in America,” Mr. Ball said. “We’ve all mingled, and we have done so for generations.”