Zahara Jolie-Pitt and the Politics of Uncombed Hair 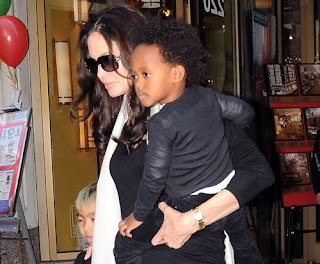 A few years ago when actress Angelina Jolie announced she’d be adopting a 6-month-old girl from Africa, I had mixed emotions. I’ve always thought Jolie was one of the flyest chicks in the Hollywood game, but interracial adoptions can be a tricky thing no matter how fly you are.

I’d heard the horror stories around Hollywood about the adopted black children of white movie stars becoming incredibly confused about their backgrounds. For instance, during an interview with Oprah Winfrey a few years ago; Tom Cruise said his interracial son, Conner, was not a color, so the family didn’t discuss race.

Nice sentiment, but in the real world Conner is considered black. If not Cruise, then someone else will point that reality out to Connor with little hesitation. This is one major reason there has been such a hot national debate over interracial adoptions. The fear is that non-African-American parents won’t be able to raise black children with an understanding of who they are and what that means in mainstream society. Such an understanding is just as imperative as shelter and food if the child is to survive and thrive.

Up until recently, Angelina Jolie seemed to be doing a pretty decent job with Zahara Jolie Pitt—providing essential and expensive medical care, purchasing land in Zahara’s native Ethiopia with the plan to build a health center, providing a life of adventure and opportunity. Wonderful things indeed, but lately it seems Angelina has taken a page out of Tom Cruise’s book—and it all comes down to Zahara’s hair.

It’s no secret that black women and their hair have always had a very complicated relationship. In a society that values fine facial features and long silky, straight hair, African-Americans' sometimes kinky, fragile, and unruly hair can be the bane of a black woman’s existence if she allows it.

Hair is often the first thing others notice, be it the texture, length, fullness, or shine. In the African-American community it can also tell a story. It can indicate your background, lineage, and social standing. From slavery until today, skin color and hair texture played a large part in how the overall society viewed blacks and ultimately the way African-Americans saw themselves.

So a black woman has two options: either submit to damaging relaxers and hot combs, or keep hair natural—while still ensuring that it’s well conditioned, well combed, and in place. There are many legacies of black hair in America, but the most enduring is this: even those who eschew pursuing European-looking hair still take a tremendous amount of pride in looking well groomed and put together, and still need to devote time and energy to achieve this effect.

It’s no wonder that African-American women are the largest consumers of hair products, spending close to a billion dollars each year to control their hair. These same women passed down these perceived notions about hair to their daughters. They usually begin hot combing and braiding the child’s hair to take the kink out at an early age.

But even the mothers who spare the hot comb still have to put time and effort into keeping hair healthy: Any self-respecting black mother knows that she must comb, oil, and brush her daughter’s hair every night. This prevents the hair from matting up, drying out, and breaking off. It also prevents any older relatives from asking them why you’re neglecting your child and letting her run around looking like a wild woman. Having well-managed hair is not just about style, it’s about pride, dignity, and self-respect. Keeping your daughter’s hair neat is an unspoken rule of parental duties that everyone in the community recognizes and respects.
.
Hair that is nice, neat, and cared for also gives African-American girls the confidence that they can fit into the world at large without being seen as completely different. One truism of childhood is that nothing is more important than being like everyone else. Well, as like everyone else as you can be with Hollywood parents. But not all people will recognize Zahara as the child of movie royalty. To many, she’ll be just a black little girl—and a black girl with bad hair at that.

In recent pictures it's clear Angelina Jolie hasn’t taken the time to learn or understand the long and painful history of African-American women and hair. If she had I can’t imagine she would continue to allow Zahara to look like she has in the past few months. Photos of Zahara show the 4-year-old girl sporting hair that is wild and unstyled, uncombed and dry. Basically: a “hot mess.’’

African American blogs and forums such as Media Takeout, Black Hair Media and even mainstream outlets like TMZ have been on fire the past few weeks demanding to know why Angelina won’t just comb Zahara’s hair? Each blog receives hundreds of e-mails every time they run a picture of the little girl with her hair uncombed. "I just hope that they realize she has different hair needs and find someone black who can keep her hair looking good,” said a commenter on Bossip.com. "Angie, if you can’t comb hair then get someone who can. This is ridiculous now. Your hair is always in place and so is Shiloh’s. Why does Zahara have to always look like she just woke up?" writes a commenter on TheFabLife.com.

This is not to say that critics want Angelina to perm or hot comb Zahara's hair. Not that 4-year-old African-American girls don't get their hair hot combed. I certainly did every Saturday for Sunday morning church. Instead, the majority of those writing in to the blogs say they just want Angelina to brush and oil the little girl's hair so it will be healthy and in shape.

Elaine Jones of the blog Womanist Musings says she’s been amazed at the number of angry e-mails directed at Jolie on this issue. “I mean I don’t deny Zahara could look better, but readers seemed to be mad that Angelina seems to have such little regard for something blacks consider sacred,” says Jones. "They act as though they take it personally that Zahara’s hair looks so bad and think it’s embarrassing for all black people. I think they expected more from Angelina.’’


Lisa Brown, a 35-year-old secretary from Dayton, Ohio, says she felt compelled to comment online about Zahara’s hair because she’s followed Zahara since the day Angelina brought her home.

“It just hurts my heart because I know that little girl won’t be even able to look at her baby pictures without being perplexed at how she looks and why,’’ says Brown. “She doesn’t know any better now, but she will once she gets into school and sees other little girls that look like her with combed and neat hair. She’s going to feel like the odd man out.’’

Brown says she worries that the little girl will one day resent her adopted mother.

“It would be a shame but not surprising,’’ says Brown. “Why adopt her if you’re not going to do your best to raise her to be confident and fulfilled. Other cultures might think this is petty, but trust me it isn’t for a young black girl.’’

In sharp contrast, Madonna, who adopted a little African girl earlier this year from Malawi, makes sure her daughter’s hair is either braided with beads or bows. Recent photos show the little girl modeling neatly done cornrows with white beads at the bottom—a la Venus and Serena Williams.

If Jolie needed even more inspiration, all she has to do is look toward the White House. First daughters Malia and Sasha don’t have stick-straight hair, but they do have their hair done in varying styles from day to day. Malia favors simple twists on her natural hair that allow her to run, swim, and play without worrying her hair will revert (puff up or kink up). Youngest daughter Sasha either wears her hair in braids, a ponytail, or loose curls.

In fairness, Jolie did hire Beyonce’s hairdresser Kim Kimble a few years back to care for Zahara’s hair, (a bit of overkill if you ask me—particularly since Beyonce mostly wears wigs and weaves) and Pitt has even said in interviews that they use Carol’s Daughter, a black hair-care line. But it seems the constant travel the family’s been doing over the past year has put issues like grooming on the back burner. For the record, Jolie’ daughter Shiloh isn’t exactly looking like much time is being given to her hair either. But she isn’t a little black girl being judged by mainstream standards.

There are those who say there is nothing wrong with Zahara’s hair at all, that her hair is in its natural state and that’s just fine. I say natural hair---afro, dreads, etc. is fine, if it’s maintained regularly or when the child is old enough to make that decision for herself. Until then, the child’s parents are responsible for their general care and upkeep. Zahara is not even old enough to know that her hair looks dry and damaged as it stands straight up on her head. But there will come a day when this beautiful little African girl will understand what it means to be an African-American woman in this society and realize unlike her younger sister, hers is not a wash-and-go world.