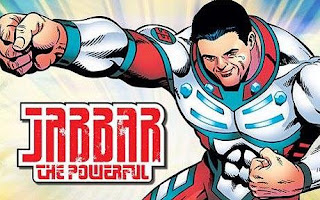 Jabbar, is one of The 99, the world's first Muslim cartoon superheroes

Named the 99, as each possesses one of Allah's 99 attributes, the characters include a burka-clad woman named Batina the Hidden and a Saudi Arabian Hulk-type man named Jabbar the Powerful.

They have proved a hit from Morocco to Indonesia and were recently named as one of the top 20 trends sweeping the world by Forbes magazine.

Now they are being brought to British television by Endemol, the production company behind Big Brother, with a mission to instill Islamic values in children across all faiths.

click here for: How the Urban Chameleon Came to be
Posted by Tickles.Tv at 12:43 PM