Venus and Serena Williams Dance Off 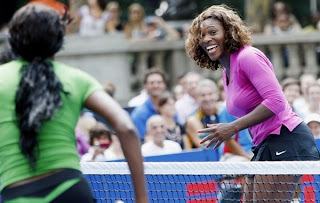 I was just watching ESPN talk radio and where they showed footage from the DIRECTV ESPN US Open Experience, a free tennis exhibition and USTA clinic at New York City’s Bryant Park) of Venus and Serena Williams to what appeared to be break dancing on the tennis court! You have got to love these sisters. Unfortunately I cannot find the same video online but found some of the other "dance off" footage on the same court. People were cuttin' it up out there.

In more news, it was announced Tuesday that the tennis stars are joining Marc Anthony, Jennifer Lopez and Gloria and Emilio Estefan in becoming limited ownership partners in the National Football League’s Miami Dolphins, making them the first female African-Americans to hold an ownership stake in a NFL franchise and two of the few African-Americans league wide.
full article from crunktasical.net
Posted by Tickles.Tv at 9:57 AM

Email ThisBlogThis!Share to TwitterShare to FacebookShare to Pinterest
Labels: Dance off, dancehall