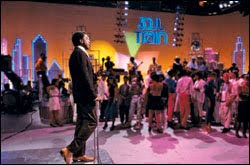 Warner Bros. has hired Malcolm Spellman to write a feature based on the classic TV show "Soul Train."

Darryl Porter and Aaron Geller of Porter/Geller Prods. will produce with Don Cornelius, the host and producer of the famed show, which ran from 1971-2006.

Spellman said that he's writing a film set in the 1980s.

"All of the hip-hop street dances you see today were born during that time period and were first seen on that show, and I remember doing all of them when I was a kid,"