Tryouts for My Negro League: A Little More than Botanical Brunch

As part of my ongoing effort to date Black men in spite of my endless queue of fair-skinned suitors, last week I attended an all-Black black tie event. It seemed like the perfect investment of time and money for a busy Wall Street banker, sistah girl like myself: an evening of dinner and dancing with a self-selected group of young urban professionals all in an effort to raise money for the kids. I was game. And wouldn’t you know it yall, I meant a really chill brother in the process. He was funny as hell, entrepreneurial but not pompous and didn't look at his Blackberry every 2min … I was pleasantly surprised. So, long story short, we exchange digits and met up last Saturday. The problem is that you can't always tell what kind of brotha you're really getting when he's in a uniform suit. Regardless, we still made plans to hang out. The goal was to do something other than the typical dinner and/or drinks so we decided to check out Brooklyn Botanical Gardens and grab a late Brunch. Little did I know just how “out of the ordinary” our rendezvous would be.

And so there I was patiently waiting for him amid a sea of hydrangeas, when the following pink object moved into my line of sight: 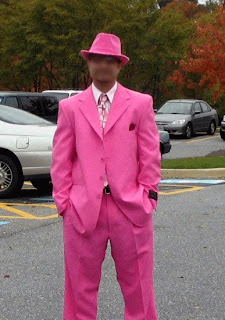 “Oh lord.” I thought. “You have got to be kidding me.” But it was no joke yall! My ass had trekked it all the way to Brooklyn (I live in Manhattan … no, not Harlem, just Manhattan … don’t judge), and here I was about to spend the day with the damn Easter Bunny? Lord-a-mercy. Now it's not like I was expecting the brotha to show up in black tie but this is not what I call casual Saturday attire.

Yall shouda seen the looks on the faces of the kids! They weren't sure if he was pimped out Easter Bunny or a Power Ranger pimp … maybe a Tell-a-Tubby pimp? It was Hilarious! I mean, talk about putting a sista out there yall. Suffice it to say, we were NOT incognito at the Botanical Gardens among the swarm of Park Slope children, strollers, nannies and biscotti's.

But, the eccentric fashion sense aside, TJ was actually fun! There was not a dull moment. He's good people and a breath of fresh air from the stuffy wall street types. Plus, he's a consummate hustler. If any of yall are looking for a flatscreen TV, this homeboy "has" some phenomenal ones that he's selling at half the price. So just holla black.

However, after learning he was fifteen years older than me with six children (not to mention that suit) sadly he has not qualified for the starting line up of the Negro League. I can't be having this brotha laughing my ass into popping out a another baby for him. But what's a sistah to do the dating pool is ROUGH out there. Maybe I'll just guarantee him a secure seat on the BENCH. I mean it's not every day you walk around Grand Army Plaza with a modern-day urban pimp from the Bronx with a great sense of humor!

click here for: How the Urban Chameleon Came to be
Posted by Tickles.Tv at 8:30 AM