In coming across this post on Hip Hop Wired it has launched a question to be talked about here on HOTUC, is Gay the new Black? Some argue, absolutely not that being gay is a problem that can being cured by a therapist where as one can't help the color of their skin. Regardless of your theory of why someone is gay, the only question is why isn't everyone entitled to equal rights.

In regards to this article if Brotha Malcolm was gay would it change his historical value? 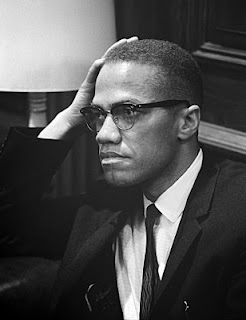 It seems that a change of strategy was all too inevitable after gay and lesbian support groups were left reeling at the hands of Maine's citizenry. The new order of the day seems to call for a more personal approach to replace the forceful tone often associated with such groups.

Gay rights activists have taken an unprecedented step in revealing some of histories most polarizing figures little secrets, namely, that they were all apart of the lesbian, gay, or bisexual community.

A controversial article has many, especially those in the Black community, highly pissed off.

A writer for British newspaper, The UK Guardian, is asserting that revolutionary and Black activist, Malcolm X, engaged in a myriad of gay, sexual relationships and was bisexual.

Peter Tatchell gives “credence” to his claim by citing unreliable second-hand sources, claiming that members of Malcolm's family and several Black activists have worked tirelessly to cover his homosexual relationships while keeping the media unaware of the “full spectrum” of his sexuality.

Tatchell even pointed to instances, cited by other misguided writers, of accounts putting the Black Liberation and civil rights icon in a dress!

There is no doubt that everyone has secrets, but this man (and everyone else who has added to this nonsense) should feel the shame of one million liars for attempting to tarnish the name of a man that played a huge role in the securing of our rights as Black Americans.

Malcom X served as the fiery sword to Martin Luther King's dove; his work has never truly been appreciated in mainstream society, but he is appreciated and idolized by those who are benefiting from his contributions to a legendary movement.

One of our most proud Black leaders does not need to have his legacy besmirched, added to annals of unspoken, discredited Black leadership, all because one man is mad that he can't "marry" his old roommate from college.

The struggle by Black Americans for Civil Rights is not the same as the LGBT (Lesbian, Gay, Bisexual, Transgender) fight for the "right" to marry, and I am sorry for those that believe they are related in any way.

Bottom line, Malcolm X was an imposingly powerful and brilliant man in life, and he has surpassed legendary status in death. No man can take that away from him. Peter Tatchell is the worst kind of scum bucket, bottom-feeding, troglodyte resembling trash!

click here to read Peter Tatchell's article Malcolm X was Bisexual. Get Over it.