The fact that a show about the life of the Nigerian, activist, musician, Fela Anikulapo Kuti has been brought to Broadway with the help of Jay Z, Will and Jada Pinkett Smith- is pretty spectacular! In going to see the show Fela last Saturday I would encourage you to buy your tickets today and see for yourself how unbelievably powerful this musical is. It is not to be missed!

Jay-Z, Will and Jada Pinkett Smith Have Joined ‘Fela!’ as Producers 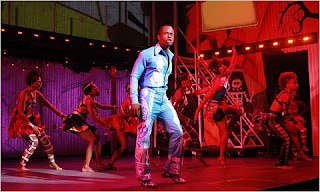 Jay-Z, Will Smith and Jada Pinkett Smith have signed on as producers of the new Broadway musical “Fela!” and will attend the show’s opening night at the Eugene O’Neill Theater next Monday, Nov. 23, a publicist for the production said.

“Fela!” represents the first time that Jay-Z and the Smiths have joined a producing team of a Broadway show. Their artistic involvement in the musical is bound to be minimal, given that the show is already in previews and had a critically acclaimed run Off Broadway last year.

But the presence of three high-wattage celebrities at opening night, and the likelihood that they will promote the show through television appearances and media interviews, is bound to raise the public profile of “Fela!” at a time when theatergoers have plenty of choices for Broadway musicals.

Revivals of “Ragtime,” “Finian’s Rainbow,” and “Bye Bye Birdie” opened this fall, as did the new musical “Memphis,” and the much-anticipated revival of Stephen Sondheim’s “A Little Night Music” opens next month. Several musical entries from last season, like “Billy Elliot,” “Hair” and “Next to Normal,” are still going strong.

Conceived by the Tony Award-winning choreographer Bill T. Jones, “Fela!” centers on the life and work of the Afrobeat superstar Fela Anikulapo Kuti. There are no widely known stars in the cast, which makes the involvement of Jay-Z and the Smiths even more of a boon for marketing purposes. It was not known on Monday how much money the three had invested in the musical; the three were not immediately available for interviews, said the publicist, Billy Zavelson.

He also confirmed that the opening date would be Nov. 23, as originally scheduled. At first, Jay-Z had a scheduling conflict for Nov. 23, so the 24th became an option if the Smiths could rearrange their own calendar. But the alignment of the three stars has been worked out, and all of them will be making a relatively rare red-carpet appearance on Broadway.