From Relaxed to Natural In A Day 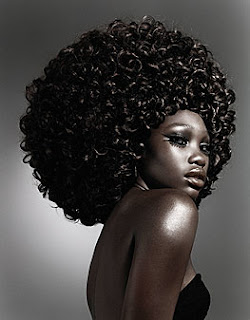 It's very common that most Black women who've grown up around-the-way and who get their hair done have experienced at least a fight or two in the salon.

As an around-the-way girl who now works on Wall Street I still go back to Queens every two weeks to get the hair done. This past Sunday marked my bi-monthly appointment and there I was in the salon buried in my normal reading material of the Wall Street Journal after of course catching up on the gossip magazines when all of a sudden I hear, "Bitch call my man one more time and I'm setting this entire muthf*ka on fire!" I look up and to my surprise a petite white woman is in the door way of the salon rocking some Vercase shades, door knocker earrings, sporting some f*k'em gurl red nail polish that I only noticed because her hot red finger was pointing right at my hair dresser.

Now the first thing I thought was wow regentrification, how nice, but upon second thought after re-evaluating the situation of how gangsta this white women rolled up in here it was clear that she's a native not someone who had been priced out of Manhattan looking to save a buck to be reinvested back in her 401k. Naturally my hair dresser had to step away from putting in the rest of my relaxer to handle her business which resulted in fingers be thrown in the other ones face with some back and forth chest shoving. You know the kind of shoving, pre-fight, people do where technically no one has thrown the first hit but trying to provoke the other one to. Normally I would have been engrossed to see where this climax was leading for it had been years since I had witnessed a salon fight but being that it was me with the relaxer in my hair I could not afford to roll up to work Monday morning balled because of my hairdresser's drama. Plus the real problem is that Darlene was hanging onto the rest of the relaxer that needed to be put in my hair. So instead I called out, "Darlene it's not even worth it girl just walk away." But we all know it takes more than that to hold back a heated women who just got called out. If I could have only gotten the relaxer out of Darlene's hands to finish putting it in my hair myself I would have been cool but by this point it was being used as a weapon as she then flung it into the girl's face and a fight was on.

I was so damn mad plus the relaxer that was already in my hair was starting to burn. I looked around to see if there was another hairdresser I could grab but everyone was of course in it. Evidently I was going to have to take matters into my own hands so I ran to the sink to wash my hair out myself. By the time I patted my hair dry the two women were finally pulled apart, the white girl into her friend's car and Darlene was off to cuss out the man who caused her such drama on the lord's day. Meanwhile I was patting my hair dry with a towel only to unveil a disaster. My hair was part straight and part nappy. I was heated. Now that the commotion was over my jacked up hair became the new center of attention with every women in there looking at me like I was a freak show.I was supposed to be pitching to a new client tomorrow and could not be showing up with my hair looking confused. There was only one thing to do in this kind of situation, I needed a WEAVE! and quickly. Luckily the customer of another hairdresser in the salon felt so bad for me she let me cut in. Ladies you know how it is and how long a day at the salon takes so for somebody to be jumping you is HUGE! The problem is the only weaves in the salon was the big Afro hair. Now to be real I have nothing against natural hair but I was not sure if Wall Street was ready. However, it was better than my current train wreck of a situation.

Monday morning comes and I'm on the 2 train to Chambers with the suits and already getting the stares. I walk directly to my cubicle to begin prepping the documents for our pitch meeting when my white boss, Jared, comes from behind me, "Excuse me miss can I help you?"

CAN YOU BELIEVE THIS MOFO!? I seriously had to take a deep breath before turning around and responding,

"Ohmigod I didn't recognize you, did you do something with your hair?"

Now I wanted to say, "Yea muthaf*ker, after my hairdresser burned this white girl with the rest of my relaxer I decided to go natural. How was your weekend?"

But instead I calmly responded, "You know us women, always trying something new."

Do you know this jackass had a nerve to first say, "Wow, wow, wow" (yea three times) "Ok I just wish it wasn't SO new before this meeting."

It took more deeper breaths to keep myself from leaping on top of his ass and beating his ass down. To make a longer story short. I close the damn deal AND the client wanted to make sure I would be the point person on the account. Therefore Jared can kiss my natural Black ass...however when my hair grows back a new stylist will be relaxing my hair.

click here for: How the Urban Chameleon Came to be
Posted by Tickles.Tv at 7:26 AM