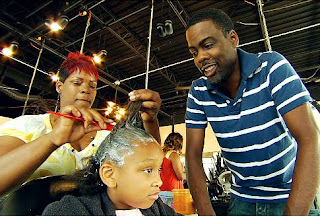 A group of us gals went to check out Chris Rock’s film Good Hair this past weekend, which surprisingly sparked interesting debates.

I say "surprisingly" because after 30ty sumptin’ years of being Black, a woman and living with hair I went into this film thinking there is nothing new that could possibly arise in conversation.

I expected to chuckle at Rock’s commentary and every now and then throw the movie screen a little church affirmation, “Hmm hmm.” Although I should have known better because Black women can always conjure up a new variation of the discussion around hair, it’s in our DNA. But how about Oprah’s recent interview with Chris Rock about “Good hair” and opening up the conversation to now include white women who color their hair blond. Is this to say we’ve all suffered the same oppression? Really?

There is no doubt about it that all women are oppressed by the beauty industry, not matter what race most try to achieve some level of unachievable beauty. But let’s not allow this to convolute the issues because Black hair is and will always be its OWN issue. It’s tied to our lineage and the battle between us and our hair is a reflection of racism from WAY BACK, slave days, way before a beauty industry even existed and the truth is we’ve internalized it.

A girlfriend of mine argued that she didn’t feel like we initially began straightening our hair to look white but rather it was about being able to manage our hair. But isn’t the idea of “managing” a colloquial term? Why does Black hair have to be managed?

My Dominican friend was even telling me how when a baby is born into the family the women all ask, “How’s the hair?” Meaning is it nappy or the good hair, the kind that blows in the wind.

One guy recently told me that his family would look at him crazy if he brought home a girl with locks.

There is no doubt that a large number of the Black community still judges you on your hair type and length- could internalized racism not be more clear? However I wonder if the beauty industry and maybe even Oprah help to disguise this for like the “N” word over time we forget history and find new meaning.