President Barack Obama says the U.S. partnership with India will be one of the defining relationships of the 21st century. Mr. Obama and Indian Prime Minister Manmohan Singh spoke to reporters after a two-hour meeting. 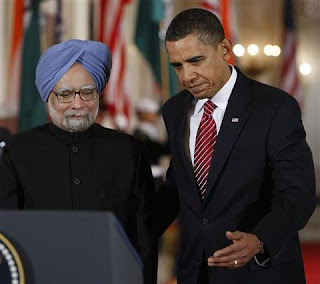 President Barack Obama says the U.S. partnership with India will be one of the defining relationships of the 21st century. The statement came as Indian Prime Minister Manmohan Singh made the first state visit of the Obama presidency. The leaders of the world's oldest democracy and the world's largest pledged to work together to strengthen the global economy, curb climate change, limit the spread of nuclear weapons and fight terrorism. After a two-hour meeting with Mr. Obama, Prime Minister Singh told reporters he has invited the president and his family to visit him in India next year. "I have invited President Obama to visit India. A very warm welcome awaits him, his gracious wife and his two daughters," said Mr. Singh. Mr. Obama praised his visitor as an honest and wise man, and accepted his offer. "I have happily accepted his gracious invitation to visit India next year," he said. After their meeting, Mr. Obama said he and the Indian leader had agreed to "work even closer" to share information between their law enforcement and intelligence agencies in the fight against terrorism. Mr. Singh promised to cooperate more closely with the U.S. to defeat terrorists. "The forces of terrorism in our region pose a grave threat to the entire civilized world, and have to be defeated," he said. When questioned about the long-standing rivalry between India and Pakistan, Mr. Obama said it is not Washington's role to try to resolve the conflict from the outside. But he said the U.S. can find ways to help. "On the other hand, we want to be encouraging of ways in which both India and Pakistan can feel secure and focus on the development of their own countries and their people," Mr. Obama said. The U.S. is India's largest trading partner, and the president paid tribute to India's large and growing economic role in Asia and throughout the world. The United States and India have disagreed on their commitments to reducing greenhouse gases, with the climate change summit taking place in Copenhagen, Denmark next month. But Mr. Obama said the two leaders had moved a step closer to bridging the gap. The day ended with the Obama administration's first state dinner. The president honored Mr. Singh with a toast in which he celebrated a "great and growing partnership" between the two countries. "To the future that beckons all of us," he said. "Let us answer its call and let our two great nations realize all the triumphs and achievements that await us." Prime Minister Singh told the president he was overwhelmed by the Obamas' hospitality, and he called Mr. Obama an inspiration. "Mr. President, your journey to the White House has captured the imagination of millions and millions of people in India," he said. More than 330 guests attended the dinner, which was held in an elaborate tent on the White House lawn, instead of the usual location for such events, the much smaller State Dining Room. source from www1.voanews.com 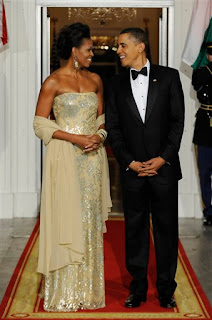 ews First Lady Michelle Obama looked smoking hot in a gleaming silver-sequined, cream-colored gown (last) night to the first state dinner held by her husband’s administration. She was tending to her hostess duties in a strapless silhouette with the beads forming an abstract floral pattern that was custom-made by (Indian designer) Naeem Khan.
source from apakistannews.com