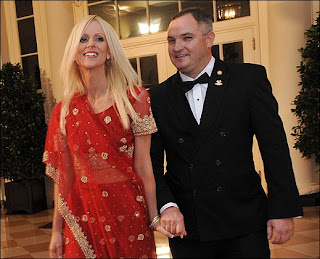 Although it is frightening to think how easy it was for two people to get that close to President Obama considering the amount of threats he's received I doubt that this couple was out to stab him with a fork as reported as a possibility in the CNN video below. This story is about a couple who managed to successfully crash a White House party and to be honest I'm a little mad that I didn't think to do it first.


OFF THE LIST, BUT SOME HOW ON THE LAWN

By Amy Argetsinger and Roxanne Roberts Washington Post Staff Writers Thursday, November 26, 2009 A couple of aspiring reality-TV stars from Northern Virginia appear to have crashed the White House's state dinner Tuesday night, penetrating layers of security with no invitation to mingle with the likes of Vice President Biden and White House Chief of Staff Rahm Emanuel. Tareq and Michaele Salahi -- polo-playing socialites known for a bitter family feud over a Fauquier County winery and their possible roles in the forthcoming "The Real Housewives of Washington" -- were seen arriving at the White House and later posted on Facebook photos of themselves with VIPs at the elite gathering. "Honored to be at the White House for the state dinner in honor of India with President Obama and our First Lady!" one of them wrote on their joint Facebook page at 9:08 p.m. But a White House official said the couple were not invited to the dinner, not included on the official guest list and never seated at a table in the South Lawn tent. A woman describing herself as a publicist for the Salahis denied that they were interlopers. Pressed for details, Mahogany Jones sent a statement saying simply: "The Salahis were honored to be a part of such a prestigious event. . . . They both had a wonderful time." While the White House offered no official explanation, it appears to be the first time in modern history that anyone has crashed a White House state dinner. The uninvited guests were in the same room as President Obama, first lady Michelle Obama and Indian Prime Minister Manmohan Singh, although it is unknown whether they met the Obamas and the guest of honor. "Everyone who enters the White House grounds goes through magnetometers and several other levels of screenings," said Ed Donovan, a spokesman for the Secret Service. "That was the case with the state dinner last night. No one was under any risk or threat." Donovan said a preliminary internal investigation Wednesday identified "a Secret Service checkpoint which did not follow proper procedure to ensure these two individuals were on the invited guest list." He declined to give further details. An administration official said the White House will conduct its own review. The Salahis, both in their 40s, showed up about halfway through the guest arrivals. A Marine announced their names, and the couple -- he in a tux, she in a striking red and gold lehenga (traditional Indian formalwear) -- swept pass reporters and photographers, stopping several times to pose for pictures. They then walked into the White House lower hallway, where they mingled with guests on the red carpet before heading up to the cocktail reception in the East Room. Later, they posted pictures that seem to chart their course through the night: Michaele posing with Marines outside near the White House doors, and with Katie Couric and Rep. Ed Royce (R-Calif.) inside the mansion. In the East Room, the Salahis both cozied up to D.C. Mayor Adrian Fenty and his wife, Michelle. But the best was yet to come: Once inside the dinner tent, they got pictures that appeared to show them with ABC's Robin Roberts, Bollywood composer AR Rahman, PepsiCo CEO Indra Nooyi, Obama Chief of Staff Emanuel (identified as "Ron" in the couple's Facebook photo caption) and two with a grinning vice president. The photos end there -- no shots of the Salahis sitting at a table, their seatmates or the post-dinner entertainment. How could it happen? A former White House senior staffer -- who more than a decade ago encountered a crasher at one of the executive mansion's less-fancy parties -- offered this theory:
read the rest on washingtonpost.com