Time for a Spliff Break 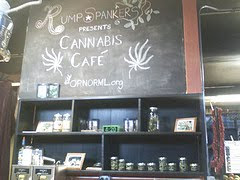 When life is just too rough

and the man has got his foot up ya' ass

it may be time for a SPLIFF BREAK.

Have you applied for you medical marijuana card today?

NORML executive director Madeline Martinez called marijuana “the safest medicine known to mankind” and said she expected up to 300 people until 10pm tonight. Seven people will be checking the doors to make sure all patrons are Oregon NORML and Oregon Medical Marijuana Program cardholders. Café workers also hold cards.

“We’re never going to stop,” Martinez said. She says the Rumpspanker’s space has surrendered its liquor license to avoid problems with the OLCC. Rumpspankers will keep conjuring cookies and scones. But now mostly volcanoes, a vaporization method of marijuana intake, adorn the flat surfaces of the cafe.

Martinez also spoke of “harnessing the black market” and using it to help the economy. Oregon NORML founder Anna Diaz said in the six years the organization has been meeting, there has never been an incident with the police, and that they are “hoping to be respectful” to their neighbors.

Elizabeth, who had two spinal surgeries in the past three years, just received her medical marijuana card and hopes to convene with other marijuana users on how to deal with pain. “They’ll know my name here,” she said, as the scent of fresh weed wafted by.

The rest, to be honest, is a little hazy
source blogweek.com