Tiger Woods a Fraud or Flawed?

Queen of the Last Word

Boy does the media take it to anothe 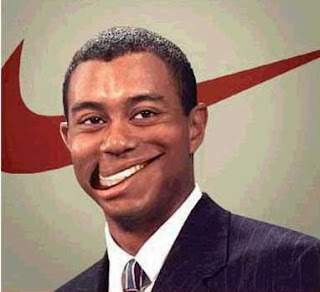 r level when a “scandal” breaks. It’s as if they’re always trying to match the level of coverage of O.J Simpson in the white Bronco. Think about it?

But on another note Tiger Woods is off the hooks and not because he cheated (for I don’t judge) but because of how’s he handled the situation. The fact that this man thinks that he’s really entitled to privacy is hilarious as released in his statement. Uhhm no, you don’t get to be a billionaire without consequences, you’re a billionaire because “we” made you one and there for your life is our entertainment. Furthermore if you really want people to stay out of your bidness, here’s an idea DON’T CHEAT! Especially with a cocktail waitress. I mean how do you really expect that situation to end?

Here’s the thing, in life we are constantly faced with the choice of either taking the red pill or the blue pill. We can either enter the matrix and go down, down, down the rabbit hole or take a cold shower wake up and shake sh*t off. Tiger chose to go down a rabbit hole of stanky danky sh*t.

All that being said, I could care less about this man’s situation for I never held him up to a pedestal. He is human and humans are flawed but anyone who thinks he should lose his endorsements just because he’s cheated is DELUSIONAL. Sorry to tell you but it’s NOT happening. Nike has not displayed a history of dropping a famous athlete for infidelity and chances are won’t be starting now. Come on people this is America, C.R.E.A.M. (Cash Rules Everything Around Me) Now had he hit that woman OH LAWD that would have been another level! His ass might have at least been spanked and sent to bed with no TV.

So now the latest-not only is he not losing his endorsements but apparently there will be a renegotiation of him and his wife’s prenuptial agreement. Before the wife was to get 20 million if she stayed married to Tiger for at least 10 years (5 more years to go!) just because she is seen as the ideal wife (i.e. not pimping a skin care product on the Home Shopping Network) they (Tiger’s people’s) want her to stay! And for this she would be paid what would total to be an estimated amount of 75 million dollars for 7years! (source form sports.yahoo.com) Man oh man when I tell you that these are some rich people’s problems, holla if ya heard. Can’t relate. Can’t relate.

Watching ESP earlier they interviewed the friend, the guy who apparently introduced the wife to Tiger Woods, who said that he owes her an apology for they thought Tiger was a better man. Are you kidding me? They don’t owe that woman nada; she’s getting 75 million out of the deal. Excuse me but do you know how many heartbreaks I’ve experienced and have not gotten sh*t? In fact, some how I ended up owing the dude five dollars.