Say It Loud (Keep it Short and Proud) in GQ 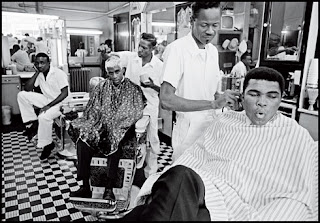 From Black Panther Afros to Iverson braids, rebellious hair has long been a quick way for a black man in America to make a strong statement. But as the formerly dreadlocked author learned, a new era calls for a more retro cut

I was dreaming deliriously on a flight back from Accra, Ghana, when I heard a woman's voice telling me to cut my hair. Even now I don't consider the whisper to have been a side effect of the undiagnosed malaria that landed me in a Brooklyn hospital two days later; I'd had dreads for fourteen years—they were down to my waist—and swore I'd never chop them for love or money. So I figured if they ever had to go, it would be the result of sudden mystical transmission.

I cut my hair soon after I landed. I was at the start of my thirties and dutifully undergoing the transitions of that age—the arrival of a son, new career moves. With a radically new appearance, I felt distinctly like a man who'd escaped through the back door of a burning building and used the second chance to set out on a completely new path. Old acquaintances stared right past me on the train, and at parties women who once denied my advances wondered who I was.

There's an élan to a tight cut I hadn't considered before; it's a throwback to an era of debonair brothers in the '50s and '60s, from Miles Davis to Sidney Poitier to Malcolm X. I didn't quite get that as a young dread; even those venerated icons seem like establishment figures when you're just starting out, so I took cues from '90s-era conscious rappers and old Bob Marley pics. I never was a cornrows guy, but Allen Iverson's braids served as a generational signpost for me.

Yet that era is over as surely as my own quarter-life crisis is behind me. We're now experiencing a restoration of black cosmopolitan glamour last witnessed fifty years ago, and the guys who define that sensibility are dudes like Usain Bolt, Lewis Hamilton, LeBron James, and yes, Obama. I see their close-cropped hair as marks of men singularly focused not on rebellion but on changing the game, or more acutely: results. It's hair for the man with a job to do rather than a comment to make.

Of course, it took work for me to find a rhythm; I was in the barber's chair every ten days, getting science on dark Caesars (No. 2 clippers all the way around), skin fades (No. 2 on top fading to clean-shaven sides), and lining—that is, debating whether my hairline should be sharp or natural. (I kept it natural.) But mainly my short hair led to new possibilities of personal style. Soon enough I fell into wearing suits and picked up vintage British looks on Portobello Road, dead-stock Dior in the East Village, and all-black-everything Comme des Garçons at Hejfina on trips to Chicago.

I now wear a suit every day of the week and sometimes on Saturdays. Today a three-piece feels less like a George Jefferson sight gag and more like a suit of armor, and I get a charge knowing that my son will remember me picking him up from grade school, understanding that his father has been handling business. Last year I saw I was heading for a rough patch, and I grew my hair and beard out in preparation for what I thought would be a long walk in the wilderness. When I realized how bad things were truly getting, however, I wheeled into a barbershop and took it all the way down. I wanted to be ready.—knox robinson