Why I Don’t Mess With Bebe’s Kids 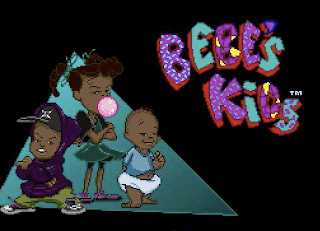 My friend and I recently joined a soccer team in NYC. We thought it would be fun way to get some physical activity going since neither of us can seem to make our way to an elliptical machine to save our lives.

Last week we had our first game, which was uptown right on the boarder where regentrification has started. We were caught off guard because when we got off the train along Broadway there were nothing but gourmet restaurants and shops but when we walked a few blocks over to our field a freestyle competition was taking place to the beats of Biggie, Mob Deep and Too Short to name a few. The other players didn’t seem to like this as they were in full concentration mode for the game. We were the only two Black girls jamming to da beats. Our team consisted of white boys who took the game way too seriously and we’re on some World Cup tip, yelling at us “Up the sides! Up the sides!” Neither of us could touch the ball with out taking some aggressive set of directions. At one point I got so nervous I accidentally kicked the ball to the other team and they scored. You know the white boys weren’t happy with this. This was not the friendly game of soccer the sign up guy had assured us.

To add another dynamic layer to the scenario, a group of Bebe’s kids were playing on the side and would every once in a while run on to the field to mess with our game. The Asian referee had constantly keep asking them to leave, which of course made them mess with us more. I tried to stay as far away from Bebe’s kids as my memories took me back to when I was growing up in Bedstuy and the horrific things I saw them kids do so I know what Bebe’s kids are capable and I don’t f*ck wit Bebe’s kids. Not to mention I wasn’t really prepared to break character in front of the white boys and get quintessential Black girl on dey ass.

One of the white boys suggested we just keep playing until a kid gets knocked down. He mentioned that the same thing happens to his friends in London and the kids learn their lesson after getting in the way. I viscerally responded that the difference here is that a kid will come back with a gun. By the look on his face he wasn’t ready for that answer.

Next thing you know, the only Black girl on the other team was in the face of one of Bebe’s girls who couldn’t have been any older than 10. Apparently one of the kids had messed with her stuff, which immediately made my friend and I go and grab our things. As we did this more and more Bebe’s kids began to pile in for the confrontation. Another white boy shouted, “Ohmigod this is like City of God with the runts!” The fact that that was his only reference for badass kids was hysterical. I began to notice that some of the kids were leaving but I didn’t trust it. My friend didn’t either. She whispered to me, "We need to raise up outta here." Just as we were creeping out we saw those same kids come back with water balloons and I thought, “Oh hell nah, for get this game I am not about to get my hair wet!’