The First and Last Black Man at the Country Club 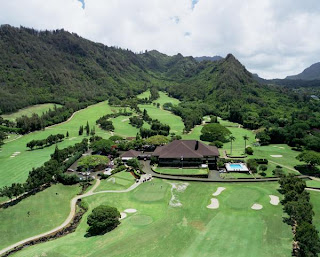 My darling grandparents (God rest their souls) decided after decades of fast and fabulous New York City living, that it was time for them to make that pilgrimage down south back to their roots for retirement. They settled on a good two acres of land that was footsteps away from a marina. My grandfather was an avid boats man and former member of the Jamaica Bay Yacht Club. It was perfect.

They moved in when I was about 5 years old. And every summer we would spend down there with them. My sister, brother, cousin and me building countless memories of an adventurous childhood in Little Washington, North Carolina. However when my grandparents learned that the country club across the street did not accept Black members, my grandmother insisted on having a pool put in the backyard so as not to "make her grandchildren feel slighted.”

Fast-forward a decade. Grandma has gone on to heaven and us grandchildren are now grand teenagers, too cool to spend our entire summer down in "North Cack", leaving my dear grandfather to socialize more with the neighbors. At a dinner party, a newcomer to the neighborhood casually asks my grandfather, "how come you're not a member of the country club, Charlie?” Crickets. Crickets and more crickets.

By the next week, everyone was up in arms with guilt and obligation and so my grandfather became the first Black member of the country club. I remember the first time going to the club’s restaurant for dinner (less than 10yrs ago) and the only other Black person was the bartender. And he was kind of cute.

A year or so later during a visit, my brother and cousin decided to get into some typical teenage mischief. They'd left the house in the morning and gone for hours. Dusk was near. The doorbell rang. Grandpa opened the door to my brother and cousin and the local sheriff. "Are these your grandsons?"
"Yes," Grandpa replied.
"We caught them driving along the main road in a golf cart they stole from the country club".

I don't know why they thought it'd be a good idea to take a golf cart to the local gas station to pick up a pack of Newports and think their Black asses wouldn't get caught.

[Sigh] I think my grandfather might have been the last Black member that country club allowed in.