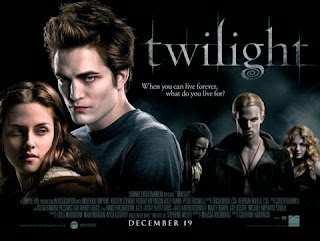 I was meeting a friend of mine for lunch the other day that had recently started a new corporate job in midtown after being laid off from where we last worked together. He’s the type of Black man who puts on the suit and tie, closes every account in success in his white corporate world but hates white people. The funny part is that they have no idea. I wouldn’t even call him an Urban Chameleon I would just call him an actor. He talks the talk and walks the walk and the most popular guy in the office. Will even go out drinking, to games and events with his white colleagues because he sees it as getting the job done but as soon as he steps out of their site I swear he does a prayer. He's still really angry about slavery.

In waiting for Michael to show up to lunch I was engrossed in my latest book, Twilight, forgetting the real world. You know when you’re at a good part in a book where you just can’t put it down, so any spare moment including waiting for the walk sign to change, you whip it out and try and read a sentence of two? That was me, however I should have known better than to be caught in this read around militant Black Michael. I was startled by the sound of his voice, “What are you a fourteen year old teenage white girl?” I jumped up immediately putting the book down that was indeed about a white teenage love story with Vampires to give him a hug and quickly mask my embarrassment before my intellectual reflexes were able to kick in reminding him that the book was a New York Time best seller. The conversation moved on but I couldn’t help but to ponder his remark.

The truth was I think I totally do have a fourteen-year-old white girl side to me. I love the show Gossip Girl, I wear Birkenstocks in the summer, Uggs in the winter, I totally have a crush on Brad Pitt and think that Al Sharpton can at times be ridiculous. Sorry not sure where that last part came from. Maybe I was just putting too much pressure on myself in the presence of my “very Black friend.” The last time we hung out he invited me to a screening of an independent film about AIDS in Africa, which I really didn’t want to see and because he seemed to sense that he gave me a guilt trip about it. Never mind the fact that I was so over that perspective knowing that Africa has much more to offer and would have been more interested in another topic. However, unless I was eagerly attending the screening in my dashiki and ankh I was not keeping it real according to militant Michael. Oh the pressure of being "Black"...