Obama Condoms...When is this a Good Idea?

I reluctantly encourage you to click on the link just to hear how they have used our president's voice to promote their product as you scroll over the tabs, "FIRED UP READY TO GO! (at least I think that's what he's saying) 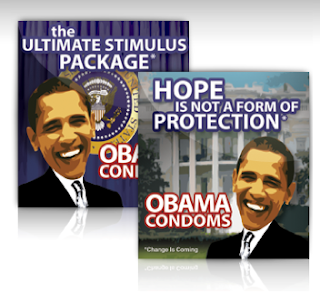 These are uncertain times. The economy's a ball-buster and the surge went flaccid... but now there's Obama Condoms, for a change you can believe in!


But seriously what would you do the first night you was gettin' some from somebody you was FEELIN' and they pardoned themselves only to return with an Obama condom?