Come on CW…How You Gonna Cut THE GAME?! 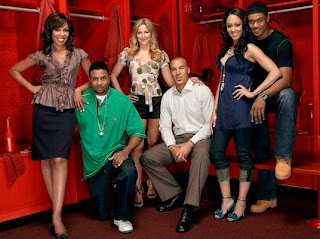 When I tell you that I love me some The Game, it’s no joke. I found myself glued to my couch one weekend catching up on the series during a marathon of the television show on BET, a network I usually stay far far far far far far (did I mention ) far far away from… but for The Game? A sista can't get enough. It normally airs on the CW but thank god BET decided to syndicate the show taking a break from their hot ghetto coonery mess of a line up they proudly parade with no shame. However, I swear The Game might be the most progressive show on television. It’s produced by Kelsey Grammer from Frasier (wait Kelsey, are you an Urban Chameleon? Go ‘head). The Game just hits you with real ISSUES. Tasha Mack who plays the “angry Black women” is actually contextualized on this show and was called out on this one particular episode that GOT ME. If you caught the episode I’m about to break down you might have the same revelation I did, which is that Black woman may be able to appear less angry if media did a better job of actually contextualized the anger. Black women don’t just wake up like “Get the fuck out my way motha fucka!!!”

In this episode, Tasha Mack and this football coach she was dating was in a coffee house and Tasha Mack (sorry she’s a first and last name kinda girl if you aren’t familiar) started breaking on the coffee latte guy. Even though the latte guy might have skipped her, her boyfriend had to point out to her that not everything warrants a fight and because he fights all day coaching at work he doesn’t want to fight when he comes home to her. She notes this and makes an attempt to try and censor herself. He then invites her over to his house for a gathering with some of his friends later that evening. When she shows up she is surprised to see a room full of white people, are his friends. (Ok so Tasha Mack is not exactly an Urban Chameleon) Although, boy when I tell you they nailed the cultural nuances of some white people and how they irk Black people- HILARIOUS! You had the white women with her dog on her lap allowing the dog to kiss her all up in her mouth. IRK #1! Then there was the white woman who put her hands all over the food and took a bite before offering Tasha Mack some. IRK#2! Then there was the smart ass, white male professor type who corrects everyone’s grammar- not just IRK #3 but the biggest IRK of them all. The reason being is that Black people don’t really take well to being corrected. We are already a confrontational race so any reason to provoke us and we go off. Well honey, Tasha Mack was a team player for her man up until this point. She had allowed the dog to give her a peck on the lips before running off to the bathroom to scrub her lip with a full bar of soap, she also even caught herself about to break and politely declined the sandwich the woman offered her. However, the straw that broke Tasha Mack’s back is when the professor corrected her use of the word “Conversate.” (oooh even my spell check doesn’t recognize this word but we use this word alllll the time and even if you don’t ya still know what it means) Honey chal, baby chal, lawd chal, Tasha Mack ultimately ended up telling all them white people to hold hands and jump off a cliff before storming out. The next day the boyfriend came over to end the relationship and Tasha was forced to look in the mirror at her anger issues.

Across the board this show presents a really great spectrum of characters and I would hate to see it go. BET really needs to redeem them selves and get this show into production. However, quite frankly, I don’t care what network The Game airs it just needs to stay ON even if that means watching it on Klu Klux Klan TV.

Have your Urban Chameleon story by e-mailing tickles.tv@gmail.com