Traveling back to the ‘Hood to Get Ur Hair Done

Some Urban Chameleon, thrive off the cosmopolitan lifestyle of having moved to the city and able to walk home after those power lunches or to the suburbs for peace and serenity or in some other cases some Urban Chameleons have been victims of regentrified neighborhoods pushing away their cultural goodies . Regardless of how far from the hood you’ve moved or the hood has moved from you, I guarantee most of you UC’s are re-visiting that 1hr to 2hr commute when it comes to your hair.

This was me yesterday traveling back to Flatbush Brooklyn, which I guess is not as nearly as bad as some of my girlfriends who travel from NYC to Washington DC to get their hair done. I was exploring getting a new hair style, the curly afro, but needed somebody tight to hook it up. My regular girl is good for other type of styles but wanted to try someone new for the new doo, which can be terrifying for a UC.

I did a week of referral research and finally landed on Empress Zakitisha Afro Hair Care, a Jamaican woman on Utica and Winthrop. Not only did this commute entail the #4 train to the last stop but then a 10min dollar cab.

Definition of Dollar cab: an African or Caribbean’s hoopty that drives up and down the main boulevard packing as many people in as he can for a dollar. Except with inflation the “dollar cab” has risen to $1.50.

The irony of the location was that it was a block away from my regular girl who I couldn’t dare let see me.

My plan was to jet out of work early but still needed to get back home to see if my hair weave had arrived from UPS. Part of my research also entailed finding the best looking natural afro hair piece from this spot in Houston, TX that a girlfriend of mine told me about. It was 3:30PM, I decided to leave the office now and go home to pick up the hair, which ego wouldn’t have allowed me to have shipped to the office. Now instead of looking like I left work THAT early, I just decided to take the sleep mode off of my computer so it looked like I just briefly stepped away. Normally I would be conscious of the environment but a sista still needed to keep her job and still get her hair done. When I got home I was in luck and my hair weave was right there waiting for me. I hurried back to the office and pretended to jump back to work. Then after waiting 45min I quickly gathered my things, spun my chair around to look like I just got up, which I figured would give me at least 10min and slipped out.

I brought a book to read on the train so the ride didn’t feel that long, it still did. When I arrived at Empress Zakitisha shop, the woman I assumed to be Zakitisha quickly brushed past me and shouted at the man from across the street to bring her back some ackee and saltfish (a traditional Jamaican dish). When she came back into her shop she quickly flashed me a customer service smile and said “Have a seat. Soon come.” After growing up with a Jamaican father I know that “Soon come” doesn’t mean anything close to that she will be with me soon. So I got comfortable as she was working on another woman. Luckily there didn’t seem to be anybody else waiting for people like these don’t take no appointments, you just gotta wait and even when they do get to you they’re doing your hair and 4 and 5 other heads at the same time--juggling that money, can’t knock the hustle. She didn’t get to me soon but sooner that “soon come.” While doing my hair people started to trickle in and then the hair shop conversations started. No matter how many times I’ve gotten my hair done over the years the conversations always end up on how we as Black people need to get it together as a race but this one turned into something more …uuuhm …new. A Rastafarian decked out in red gold and green entered the shop to sell some weed before lighting one up. He then began to pontificate about man and woman (which is always an interesting perspective from a Rastafarian). I had dozed off from the convo having no interest in the patriarchal spew either that or high from contact but was then startled by the sound of a big Black woman shouting back at the Rastafarian, “SHOW ME WHERE IN THE BIBLE IT SAYS WOMEN SHOULD NOT HAVE A CLITORIS?!”

Big Black woman: “I am telling you from someone with a clitoris I NEED my clitoris”

The conversation progressed for 45min as the Rasta continued to support his argument from quotes from Jah Rastafari Selassie I and I could not but help to wonder if Selassie I had ever intended for his movement to be centered around the clitoris. 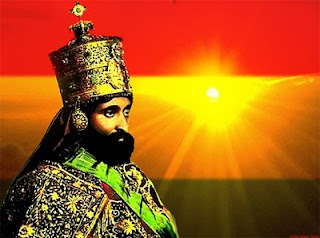 As I sat back and continued to get my hair done, I thought to myself, damn I miss the ‘hood.