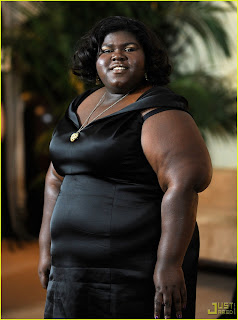 Now that the Oscars are over and we don’t have to be politically correct, can we start getting real and talk about Gabourey Sibide’s weight? Gabby, the lead actress in Precious, is not “full figured”, “voluptuous” or “curvy”. She is obese. Publicly using her body as a symbol of confident body image is not only dangerous for her but gives the wrong message to black women struggling with weight.

At 350 pounds, Gabourey is nearly 200 pounds overweight. Being only 20% overweight increases the chances of heart disease dramatically. Gabourey is 50% overweight. At only 25 years old, her life is drastically limited. She can’t ride a bike, take the stairs, or sit comfortably in a restaurant chair. Her lungs, heart, and joints are working overtime just to support her getting out of bed and walking out the door. If health risks such as heart attack, kidney failure, and diabetes are not scary enough, obesity reduces your life expectancy by 10 to 12 years. Gaborourey at the size that she is will be lucky if she lives to be 60 and that of course will not come without a couple joint replacements and multiple daily medication.

By using the words such as “curvy” and “full figured” to describe Gabourey, the same words to describe Kim Kardashian, Jennifer Lopez, and Jordan Sparks, is saying that being 200 pounds is nothing more than a preference. But it is not. Especially when according to the Center of Disease Control, 79.8% of African American women are either overweight or obese. My question is, by ignoring the health issues plaguing this beautiful woman’s life and pretending her weight issues are trivial? Is it possible that celebrating Gabourey for being “full figured” is just as dangerous as celebrating the waify arms and protruding hipbones of an anorexic?

What are we saying to the 79.8% of African American women struggling with their weight? The sentiments that this is ‘Just her size” is ludicrous. Regardless of what people might believe, no one is born obese. Obesity is not hereditary. Poor diet choices and other lifestyle behaviors are hereditary and we must stop enabling unhealthy lifestyles in our community.

In November, Gabourey discussed her confidence with Oprah. “One day I had to sit down with myself and decide that I loved myself no matter what my body looked like and what other people thought about my body." But Gabourey, why does loving yourself have to compromise taking care of your body the best way possible? Could loving yourself actually be the opposite of putting whatever you crave in your mouth? Could loving yourself mean making a conscious effort to support your body with best foods and nutrients?

Even Monique, Gaby’s co-star, for years screamed, “ I am fat and fabulous” and recently lost weight in the pursuit of being healthy. At 262 pounds, close to 100 pounds lighter that Gabby, doctors worried about Monique’s health and she made the decision to lose weight to be the best version of herself for her husband and children. Queen Latifah, another beautiful confident black woman, has publicly spoken about the health benefits of exercising and eating right. She is far from being considered skinny and her decisions about her weight have had nothing to do with what other think but everything to do with taking care of herself.

I am not at all suggesting that the praise and accolades that Gabourey has received from her acting role in Precious are not well deserved. She is shining example of what is possible in your life if you believe in yourself. Nor am I suggesting that Gabourey needs to be publicly shamed or condemned. She is a beautiful woman with enormous talent. All I am suggesting is that weight issues, regardless of what size they come in, anorexic or obese, is not a laughing matter, nor should it be ignored. Gabourey, as well as the public figures surrounding her and missing an opportunity to change millions of black women’s lives by seeing that we all struggle with weight and even in the most dire situations, health is always obtainable.

On Tuesday, after the Oscars, radio shock jock Howard Stern and his sidekick Robin Quivers, made harsh and cruel comments regarding Gabourey’s size. The rant included calling her the “most enormous fat black chick I’ve ever seen” and suggesting that Oprah and others who support the actress are lying “She’s telling an enormous woman the size of a planet that she is going to have a career”. He returned on Friday to suggest his comments were only to bring light to the seriousness of obesity in our country. Howard’s comments caused a public stir of emails and phone calls in defense of Gabourey. Both Whoopi Goldberg and Jessica Simpson made public statements calling Howard disrespectful and inaccurate.

Howard’s comment regarding Gabourey’s career has already been proven wrong since Gabby has already booked a recurring role on a TV show and two feature films but Howard was correct in stating that her weight should not be considered normal or okay. Somehow because we like Gabourey talking about the ungodly truth about her size has become just as taboo as telling a new parent their child is ugly. Somewhere in 2009, being politically correct has become more important then telling the truth. Quickly, we must get over this and save this poor girl’s life. Gabourey Sibide is obese. As a talent confident woman, she deserves the help she needs to not only lose the weight but to combat the behaviors that lead her there. She deserves a lengthy career and healthy life and her chances are greater if she looks in the mirror and says it’s time to make a change. That change has nothing to do with what others think about her and everything to do with a chance to really live life.