One Order of Health Care Reform Coming Right Up! 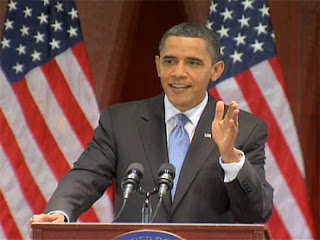 Over the weekend at this party, some man just broke out and said, "Obama just needs to just punch somebody in they face already."

"Pray tell what do you mean?" Someone asked.

I immediately knew that this man was referring to his frustrations with the ridiculous amount of hoopla the President has been going through with the Republicans for Health Care reform. After watching Bush for 8 years thug his way through his presidency not given a damn about democracy why shouldn't one be ready for President Obama to b*tch slap somebody already and lay down the law. Well thank goodness it didn't have to go there...

The House of Representatives passed the sweeping health care bill 219-212, securing a significant victory for President Obama, who lobbied hard this week for the controversial legislation.

The vote was certain after the House Democratic leadership finalized a deal this afternoon with anti-abortion Democrats to vote for the Senate-passed health care bill in exchange for an executive order from Obama affirming no federal funding for abortion.

Obama watched the vote in the White House's Roosevelt Room with Vice President Joe Biden, chief of staff Rahm Emmanuel and some 40 staffers.

When the measure passed, Obama high-fived Emanuel and hugged legislative affairs director Phil Schiliro as everyone in the room burst into applause.

"This is what change looks like," the president said in a brief speech after the House vote.

The House today voted on two separate pieces of legislation. In addition to the Senate health care bill, lawmakers passed a second, the amendments to that bill made by House members and Obama, by a vote of 220-211.

The bill now goes to the president's desk to sign, after which it will become law. Obama is expected to sign the health care bill Tuesday, after which the Senate will debate and vote on the "fixes."

As the last speaker before the vote, House Speaker Nancy Pelosi of California said that by passing the bill, Congress would be taking a historic step.

"We will be joining those who established Social Security, Medicare and now, tonight, health care for all Americans," Pelosi said.

"It is with great pride and great humility that we undertook this great act of patriotism that occurred on the floor of the house," she added.

Republican opponents of the bill continued to argue against it right up until the vote was counted.

"Can you say it was done openly, with transparency and accountability -- without backroom deals, struck behind closed doors, hidden from the people?" Boehner questioned. "Hell no, you can't."

What has been an arduous journey for the health care bill is anything but over. Once the president signs the bill, the Senate has to pass the "fixes" and the fight in that chamber has already begun.

"We shouldn't do a victory dance ... until the reconciliation bill is signed," Rep. Anthony Weiner, D-N.Y., said on MSNBC.

House Democrats, distrustful of their Senate counterparts, wanted iron-clad assurances that the Senate would pass the bill with the "fixes" the House Democrats had proposed, before they themselves voted on it.

Senate Majority Leader Harry Reid, D-Nev., delivered that assurance to House Democrats on Saturday, telling them that 51 senators had signed a letter promising to make "fixes" to the Senate bill that House members want. The names of those senators were not revealed to the press.

After the House vote, Reid released a statement promising to complete the work on "this historic effort."

"As the Senate prepares to complete our work on this historic effort, Senate Democrats reaffirm our commitment to reform because we know it's good for middle-class families, seniors and small businesses in Nevada and all across America," Reid said.

But Republicans are vowing to get the "fixes" thrown out by using a Senate procedural motion. Today, Senate Republicans said Democrats would not meet with them and the parliamentarian, a charge that Democratic staffers called "absurd."

The Senate is expected to take up the bill as soon as Tuesday, which will set in motion a week or longer of floor battles on parliamentary procedures.

If Republicans can get the parliamentarian to agree with them even once, whatever ultimately passes the Senate will have to go back to the House, much to the chagrin of Democratic lawmakers.

Democrats in the House quietly admit that it is very likely they will have to vote again on the reconciliation fixes at some point down the road.

The Congressional Budget Office predicts the bill will cost $938 billion and will reduce the federal deficit by $142 billion in the first 10 years, which the president has hailed as the "most significant effort to reduce the deficit since the Balanced Budget Act" of the 1990s.

Most Americans would be required to purchase health insurance. Small businesses and the uninsured would have the option of shopping for coverage in health insurance exchanges, a marketplace in which people would be able to shop for and compare insurance plans. Those would be implemented in 2014.

The bill also greatly expands Medicaid and subsidies to the poor. Insurance companies would not be able to place lifetime caps or deny coverage to patients based on pre-existing conditions.

Obama's executive order is likely to irk many of his supporters who favor abortion rights, but it gave Democrats the votes they needed to pass the health care bill.

"I'm pleased to announce that we have an agreement," Rep. Bart Stupak D-Mich., said shortly after the White House released a statement regarding the executive order. "We have assurances from the president and others that he will not rip this up tomorrow."

Anti-abortion Democrats had been hesitant to commit their support unless a deal was struck, but the executive order guarantees that the House Democratic leadership will have enough votes to pass the health care legislation.

"We're well past 216," Stupak told reporters, referring to the minimum number of votes House Democrats need to pass the bill.

The executive order will provide "additional safeguards to ensure that the status quo is upheld and enforced," White House Communications Director Dan Pfeiffer said in a statement.

The president's order is to ensure that current law that restricts federal funding from going toward abortion, known as the Hyde amendment, is maintained. It will extend those restrictions to the newly created health insurance exchanges.

"It is necessary to establish an adequate enforcement mechanism to ensure that federal funds are not used for abortion services," the executive order states. After months of negotiations, closed-door meetings and persuasion by the president, members of the House of Representatives today will vote on the controversial $938 billion health care bill.

Rowdy visitors in the House gallery disrupted the session several times. One protestor yelled "The people don't want this!" and was escorted out by security. Some Republican lawmakers were spotted on the Congressional balconies, cheering on the protestors.

On Capitol Hill and in the halls of Congress, protestors chanted "Kill the bill!" and confronted lawmakers. Some hurled racial and homophobic epithets, and one even spit on Rep. Emanuel Cleaver II, D-Mo.

Rep. Barney Frank, D-Mass., who is openly gay, encountered homophobic comments as he walked through a crowd of protestors Saturday in the halls of Congress.

Even as they move ahead with the health care legislation, Democrats are fully aware of the political ramifications of voting "Yes" for the bill that has furthered the divide not just between Republicans and Democrats, but among the Democratic caucus itself.

Rep. John Larson, D-Conn., the chairman of the House Democratic Caucus acknowledged on "This Week" that some members of the House could lose their seats as a result of their support for the legislation.

"Every time you have a mid-term election, you risk the chance of losing members," said Larson, the fourth-ranking Democrat in the House. "But it isn't about how many members are going to lose their seats. ... It's about this moment, it's about the truth, it's every reason why you were elected to come and serve in Congress.

click here for How the Urban Chameleon Came to be