If you aren’t already aware President Obama killed a fly during a TV interview at the White House and PETA (People for the Ethical Treatment of Animals) is calling it an execution.

An “execution” PETA? Really? Who here knows what it’s like to have a fly f*ck witchu? You know how it is no matter how many times you shoo that fly away and despite the fact that fly has an entire planet to fly around they still chose to keep f*cking witchu. I’m sorry but some flies deserve to be taken out especially the ones that won’t leave you the f*ck alone! That fly was not “innocent.” I love how animal rights groups try to act like animals are completely harmless, shit you pass through the jungle and see what happens. I even read a story about killer plants .

Was Obama out looking to execute a fly? No. The man was tying to deliver a message that effects the lives of people, yes people- remember us? And no fly should be above the law. I’m not saying that we don’t need an animal rights group but for a muthfreakin’ fly? Is that your 9-5 PETA? Cause if so yall are out here hustlin’ muthaf*ckas. You’ve gone too far PETA, you’ve gone too far.

On another note for those of us who can actually recognize the situation for what it was- have commended Obama for his “Ninja” (in the true sense of the word) skills. My man was on some Mr. Miyagi son tip with out the chopsticks.

But really… did you see Obama’s face when he caught that sucka? Below is a screen shot of the moment right after 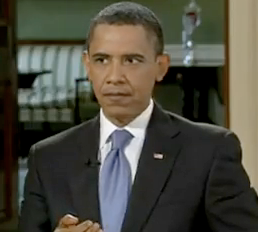 The expression on his face is on some, “Yea mothafucka, who want some.”

But only an Urban Chameleon could recognize this.

PLEASE NOMINATE US FOR ALL FOUR CATEGORIES!!!