The Conspiracy Theorist at the Family Cookout…Michael Jackson Not Really Dead? 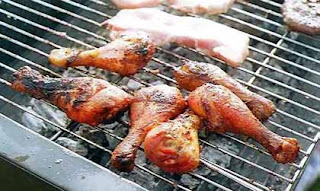 Yesterday our family had a cookout in New Jersey. When ever there is a gathering my uncle Roger stays putting me and my cousins on to the latest conspiracy theory whether it’s about UFO’s, Secret chips implanted in Asians, KFC making Black men impotent to 911 being orchestrated by the government there is always something.

His latest theory is that Michael Jackson isn’t really dead. Me and my cousins all responded, “Awwwwwww damn uncle Roger here we go.”

“Here me out, the clues are right in front of you,” uncle Roger says before listing it out for us,

1. Michael was referred to in the past tense before he was pronounced dead
2.Tito and Jermaine didn’t look that upset
3. The story from Michael’s doctor seemed shaky
4. What better way to escape all that debt

“Uncle Roger this is not enough to determine a conspiracy theory.”

“Why not? Michael’s people have duped us before putting out in the news how he slept in that Hyperbolic chamber to lighten his skin and then denied it so the press could spend more time covering Michael. Yall be caught up in the matrix if you want to but not me.”

My question is what is all this conspiracy theory knowledge suppose to prove or be protecting you from against anyway? Even if Michael faked his death the point is the man is gone. He’s at a cookout with Elvis, Tupac and Biggie Smalls. Let it go.

Though I will say one thing, in watching all the Michael Jackson news stories, tributes, E True, and CNN this one moment had me. Some attorney friend of Michael’s who’s name I didn’t catch but had me rolling as he brought back the moment of when Michael hung his new born baby out the window. The attorney justified this in saying that Michael was performing an African tradition like in Lion King where the new child is held up for the community and how dare people attack him. Hmmm?

Well it’s not quite a conspiracy but it damn sure is a theory.

PLEASE NOMINATE US FOR ALL FOUR CATEGORIES!!!