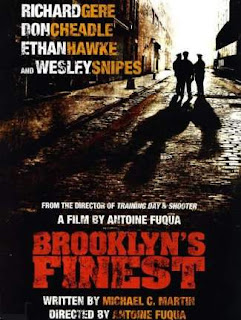 After being in meetings all day non stop from 9:30am yesterday morning to 5:30pm working on a proposal a sista girl was ready to UNWIND, which usually entails an alcoholic beverage and some mindless pass time. Just as I was trying to decide between gin or wine my home girl calls me up last minute to invite me to a screening of a new Antoine Fuqua film, Brooklyn's Finest. Being that we're both suckas for a movie that includes "Brooklyn" in the title (the Brooklyn-ights we are, REPRESENT) and it had been over four days since we last hung out we immediately made plans to meet up at the nearest happy hour by the theater. We were conveniently able to see the line for the show form as we happily sipped our $3.50 glasses of Cabernet, which was perfect since we don't do lines. So when we saw that they were beginning to let people in we quickly settled the bill, cross the street and hustled to the front and entered the theater to find our seats.

Now let me begin by saying I had no expectations for this film what so ever. Hadn't seen a trailer, a preview, an article, a blog, a fortune cookie, a nothing, had no idea what to expect and after seeing this film I would suggest that the next movie goer not expect much. The film stars Don Cheadle, Richard Gere and Ethan Hawke who are all cops but don't know each other. Gere is seven days away from retirement when his boss asks him to show a new young cop the ropes. Against his will Gere's character takes him on but the young cop is agitated by Gere's passive approach to crime when he overlooks a guy beating up his wife so he asks to be transferred to a more proactive mentor which weighs on Gere. Hawke is a crooked cop who steals drug money to try and put towards a down payment for a new house so he can move him, his wife who's pregnant with twins and their 30 other kids (that might be an exaggeration but there were so many I lost count) to a bigger place. And to really top off his "drama" his wife is suffering from mold in her lungs 'cause their current place of residence is nasty. Cheadle plays an undercover cop who's been in the "game" so long he starts to lose sight of what's right and wrong and therefore wants out but his boss wants him first to set up his childhood friend in a drug bust that is played by....wait for it...wait for it...wait for it, Wesley Snipes! Now I can't even front in a weird and twisted way it was good to see that apparent woman abuser, non tax payer Wesley.

Unfortunately everyones attempt at a great performance was muted by this clusterfuck of a storyline taking us on a journey through too many moments we just don't give a damn about. What are happening to movies people? I mean will we ever see another movie with more climatic drama then The Real Housewives of New York 'cause right now my DVR queue has a more engaging line up. This was just a horr(rolling my tongue right now)rrrrrrible version of Crash meets Training Day meets Traffic and I'm telling you that might even be too much of an over sell and even worse BROOKLYN was no where to be found in this movie other than some Biggie and Busta Rhymes on the soundtrack but I got that in my iPod!? But I tell you what could be found in this film, every non working Black actor. If you've recently been like, "Damn, what ever happened to so and so?" Chances are you will find their brief appearance in this wack ass flick. Half the cast of the Wire was cast in this film (damn that was a damn good show) and I cant even front I even got a little Nostalgic at the sight of Omar and and that slimy ass Clay Davis, "Shiiiiiiiiiiiiiiiiiiit". But overall let's just say that we were the finest thing from Brooklyn in that movie theater.

Click here for: How The Urban Chameleon Came to be