by today's Urban Chameleon contributor
an exposé by DJXS 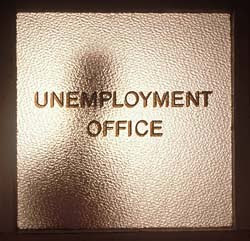 Terrence Howard would have you believe that its hard out here for a pimp, but its even harder for the unemployed fly 'n' fab. "Do tell?" --- why, I'd love to...

So here is the situation: I was employed for several years at a media company with great name recognition in a high profile department. It was a job that afforded me the enviable perks of rolling into the office at noon, traveling on someone else's dime, attending exclusive premieres, hobnobbing with the rich and famous as well as a host of other responsibilities so faboo that my friends quite frequently would curse me with that classic slur embraced by all haters, "You ain't got no REAL job." Oh, but I did have a real job as it provided a real paycheck. Was it my passion? Absolutely not. But it was a logical piece of the mosaic that is my life as an actor/dancer/writer/luxury connoisseur.

However, the good things came to a proverbial end when I became a casualty of the company's bloody layoff massacre right before Christmas ("you can stay yo' ass ho ho home" laughed the fat cat CEO at some point, I'm sure.) Yeah, I have some "follow your passion" side hustles, but for the first time in my adult life I had to deal with a sobering reality as former taunts became truth: "I ain't got no real job!"

As an admitted shopaholic, said media company gig was the wicked enabler that funded my impeccably styled descent into the twisted world of LV, Dior, Gucci, rare sneaker and vintage store binges and I wasn't sure I could just stop cold turkey. What's an urban chameleon to do when forced with trying to balance Jay-Z aspirations with a Chingy situation?

Well the income dilemma certainly had to be addressed as I couldn't live off of side hustles alone and cable bills don't pay themselves, don'tchaknow? The concept of "collecting unemployment" was so foreign to me but the time had come to power up the MacBook and familiarize myself with its customs.

Fast forward a couple of weeks and yours truly was begrudgingly up first thing in the morning for an orientation mandated by the Department of Labor who cleverly offered to supplement my income in exchange for my appearance at their poorly lit office. I showed up "dressin' recession" in an understated three quarter length Shearling coat and a pair of limited edition Japanese sneakers and patted myself on the back for having the wherewithal to leave the Louis at home --- c'mon, find the line and draw it, people!

I was eventually ushered into a room furnished with desk/chair combos I hadn't seen since 10th grade and commenced to filling out mundane paperwork with the rest of my unemployed brethren/sistren. The whole process was becoming increasingly annoying because I knew that although the Labor Department's efforts are meant to help people find work, I was sure that their listings for "fabulous cushy jobs" was... let's say "light."

My suspicions were confirmed when a sweaty bi-focaled gentleman entered the room and gleefully revealed that a Wal-Mart recruiter would be there the following week looking for stock room and night shift employees. This stunning announcement was followed with another --- that there were a few nursing positions opening in a couple of days and it was a triumph of willpower that kept me from blurting out, "Um... why the hell am I here?"

Now don't get me wrong, retail and nursing are perfectly fine career choices, they're just not "perfect" or "fine" for me. I'm an artist and sadiddy accusations be damned, price checking Snuggies all day would be sanity suicide and its certainly not conducive to my propensity for having poolside drinks at the Mondrian. I'm not adverse to working a "normal" job just as I don't have a problem rocking Kmart khakis and a mall-bought button down ---- I'd just rather really not.

However, I continued with this laughable dance of the ridiculous and sat down with an unemployment specialist who had the unenviable task of finding job opps comparable to what was listed on my resume... good luck with that, boo. We spoke for a few minutes and the gradual blanking of her facial expression was admittedly amusing as I explained the line of work that I was in; we both knew that there wasn't really much she could do for me. Apparently neither of us are quitters, so we soldiered on with the charade as she tapped away on her keyboard all efficient-like and consulted her computer monitor for some non-existant job matches. I sat there with a restrained expression that probably read "of course" and a buttoned coat that was very "can I go now?" when shocker! --- there wasn't anything in her database for me. She then delivered the Shawshank redeeming news that I was now eligible for unemployment benefits allowing me to return my Versace shades to their rightful place on my face and break the hell outta there with a Tiger-being-chased-by-a-golf-club-wielding-wifey swiftness.

So here I am, a struggling artist trying to David Blaine these unemployment checks and have them magically support both my genetic need to be fly and the monthly monetary demands of my landlord, among others. Am I looking for work? Yes. But in the meantime, the SoHo retail scene needs me, I've got photographers and graphic designers to compensate for their work on my web ventures, and there are mojitos from my favorite downtown spot that need sipping on... does the state really think I can accomplish all of this with what they're providing? I will continue ignoring the call of the stock room while in pursuit of artistic and personal fulfillment for as long as I can but if it gets to the point that I'm wearing a "May I Help You?" smock un-ironically, its gonna get ugly.

click here for: How the Urban Chameleon Came to be
Posted by Tickles.Tv at 6:54 AM