Can Love & Money Co-exist if the Woman Makes More?

Urban Chameleon news
Ms. Zielinski, the fashion stylist, said her best friend, a man, told her once: “ ‘You are confident, have good credit, own your own business, travel around the world and are self-sufficient. What man is going to want you?’ He laughed, but I found that pretty depressing.” 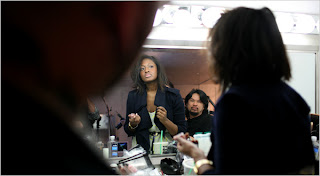 Beagy Zielinski is a German-born 28-year-old stylist who moved to New York to study fashion in 1995 and stayed. Just before Christmas, she broke up with her blue-collar boyfriend, who repaired Navy ships

“He was extremely insecure about my career and how successful I am,” Ms. Zielinski said.

An analysis of census data to be released Tuesday by the Pew Research Center found that she and countless women like her are victims of a role reversal that is profoundly affecting the pool of potential marriage partners.

“Men now are increasingly likely to marry wives with more education and income than they have, and the reverse is true for women,” said Paul Fucito, spokesman for the Pew Center. “In recent decades, with the rise of well-paid working wives, the economic gains of marriage have been a greater benefit for men.”

The analysis examines Americans 30 to 44 years old, the first generation in which more women than men have college degrees. Women’s earnings have been increasing faster than men’s since the 1970s.

“We’ve known for some time that men need marriage more than women from the standpoint of physical and mental well-being,” said Stephanie Coontz, a professor at Evergreen State College in Olympia, Wash., and research director for the Council on Contemporary Families, a research and advocacy group. “Now it is becoming increasingly important to their economic well-being as well.”

The education and income gap has grown even more in the latest recession, when men held about three in four of the jobs that were lost. The Census Bureau said Friday that among married couples with children, only the wife worked in 7 percent of the households last year, compared with 5 percent in 2007. The percentage rose to 12 percent from 9 percent for blacks, among whom the education and income gap by gender has typically been even greater.

“I’m not married, I would like to be married, and my friends are all in a similar situation,” said Dr. Rajalla Prewitt, a 38-year-old psychiatrist in New Jersey. “We’re having difficulty finding someone where there’s a meeting of the minds, where we can have the same goals and values.”

“Particularly, African-American men who are educated want a traditional home where they are the breadwinner,” said Dr. Prewitt, who is a black woman.