Urban Chameleon news
As if nominating Real Housewives of Atlanta for an NAACP Image Award wasn't bad enough they have also nominated MICHAEL JACKSON'S MEMORIAL SERVICE! This is sac religious...
Outstanding Variety – (Series or Special)
"Award" and "Memorial Service" should never be in the same sentence. 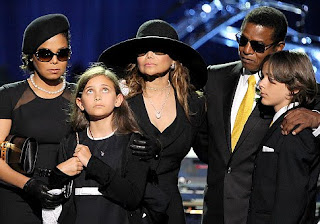 Even in death, the King of Pop is still raking in the awards.

Michael Jackson's funeral has been nominated for an Outstanding Variety award by the NAACP Image Awards.

The most emotional moment came when the King of Pop's 11-year-old daughter, Paris, took the microphone and told the audience, "Ever since I was born, daddy has been the best father you could ever imagine."

"And I just want to say that I love him so much," she added, before bursting into tears and burying herself in the arms of her aunt, Janet Jackson.

Jackson was laid to rest as extravagantly as he lived. His bronze casket, which reportedly cost close to $20K, featured 14-karat gold plate handles and a velvet-lined interior.

But the funeral was not without controversy.

Regardless of cost, the memorial service turned out to be quite a spectacle.

Akamai Technologies, a company that monitors Internet traffic, noted that at some points during the funeral, global Web traffic was 31 percent above average.

It's main competitor for the NAACP Image Award appears to be President Obama's Inaugural Celebration at the Lincoln Memorial, but anything featuring Jackson these days makes money and wins awards.

The documentary "This Is It," which featured video footage of the tour Jackson was set to embark on when he died, is the highest grossing musical documentary of all time, having taken in over $250 million.

source from nydailynews.com
Posted by Tickles.Tv at 12:07 PM