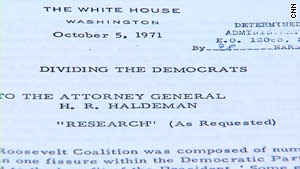 Washington (CNN) -- President Nixon's campaign strategists hoped to create controversy among Democrats by fueling a push for a black candidate for the White House ahead of the 1972 elections, according to documents released Monday by the National Archives.

Among the materials is a strategy paper titled "Dividing the Democrats" found in the files of Nixon aide H. R. Haldeman, dated October 5, 1971.

The paper, signed only as being from "RESEARCH," laid out perceived problems among Democrats that the GOP could use in helping Republican candidates, including Nixon, the incumbent president.

Among the tactics the document called for is the distribution of bumper stickers that "should be spread out in the ghettoes of the country" calling for "black presidential and especially vice presidential candidates."

read the rest on cnn.com